This is us going into The Pacific, as filmed by Jeremy on Next Step.

The Pacific isn’t sooooo different from The Atlantic, though if anything the sea is more…well, pacific.  There also seems to a lot more wildlife. We saw two whales, loads of summersaulting Manta rays, and of course the usual dolphins and flying fish. I would love to show you photos of the summersaulting rays or the whales, but alas dear reader they were too quick for me and my iPhone. So I’m afraid you will just have to believe us.

We did however manage to shoot lots of Boobies, and you will be pleased to know that we are not going to resort to the obvious jokes. Sometimes there were seven or eight of them on board. It was like a scene from a Hitchcock movie. At first we thought they were really cute, but then we noticed how much poop they produced. Goodness knows what they eat.

The Pelicans were even worse.

But it was all very nice. This was taken by Andrew on Accomplice.

Domini by Sun & by Moon. That straightaway wins the arty farty prize. Thanks Andrew. The winner gets to take the crew of Domini out for a slap up meal.

We went past Malpelo – a little island that not many people have seen because it really is in the middle of nowhere. 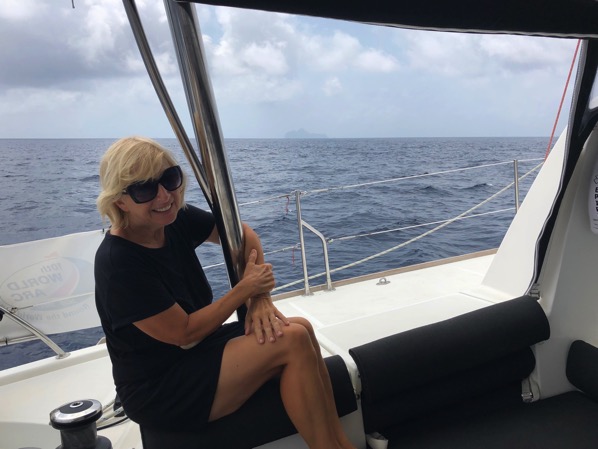 Of course we had to celebrate when we crossed the Equator.

It’s traditional to dunk the crew in water. 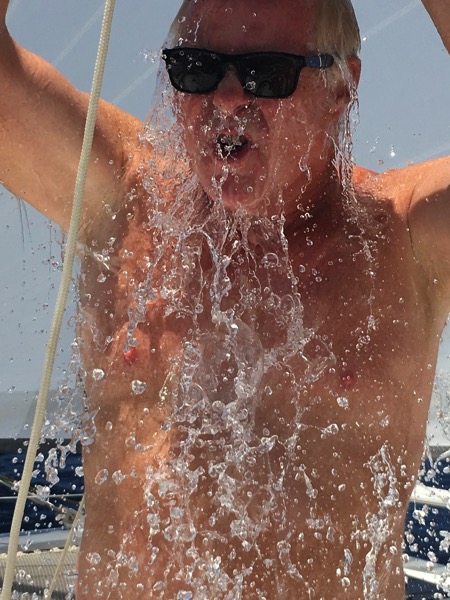 So now we are Shellbacks – which is the traditional name for sailors who have crossed the Equator.

Lyn tried to win the arty farty prize with her composition called “Hats,”

And now we have just arrived in The Galapagos.