We wanted to be able to say that we had sailed back across The Atlantic from New York, and via the treacherous North Atlantic route past Newfoundland, Greenland and so on. Now clearly that would be ridiculous in little Domini  so we decided to get a bigger boat.

And here it is.

Yes, we know that a cruise is for retired elderly folk, and that by us being on it the average age would be brought down to 83. Yes, we know that the whole time is spent knitting, playing bowls and talking about what we did in the war. And yes we know that it’s the place to go to meet rich widows and doddering old colonels with three weeks to live.

But we thought we’d give it a go anyway.

And we couldn’t have been more wrong. It is brilliant fun.

It’s not full of old fogeys. Well, there’s a few of course, but it’s mostly people like us (That is – just incase you thought otherwise – young sophisticates). And the ones who are older are all young at heart and out for a party.

We couldn’t keep up.

Of course it’s all very stylish. We had to send back home for suits and dresses, because they wouldn’t let us on with shorts and flip flops.

And if you’re not in the Veuve Clicqot lounge, then it must be time for afternoon tea. 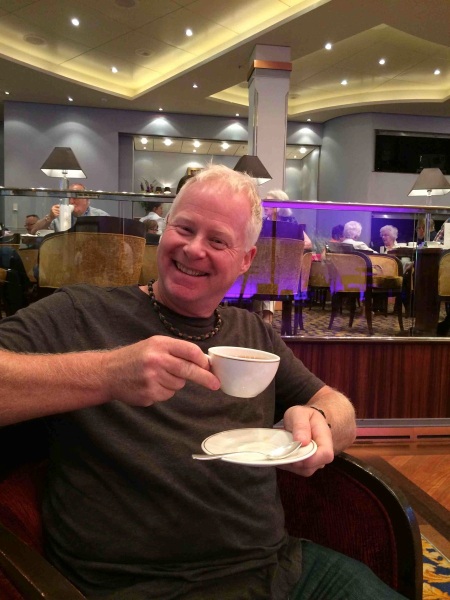 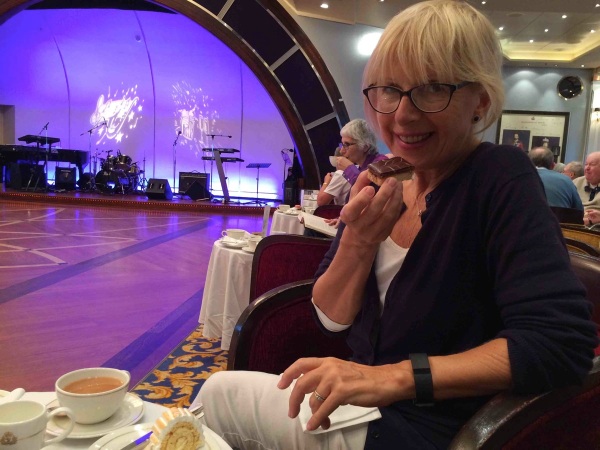 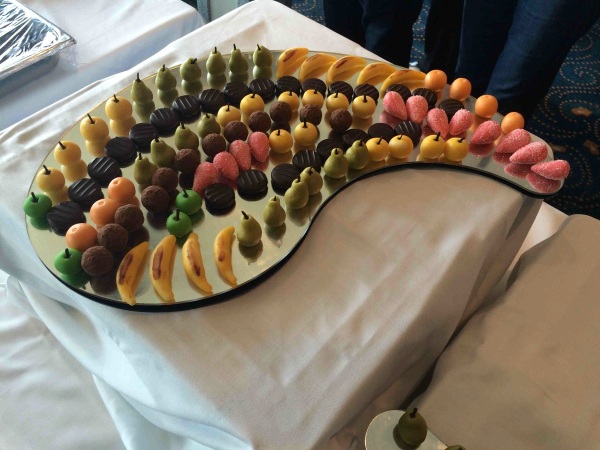 But it’s not all eating and drinking.

Actually on second thoughts, it is all eating and drinking.

But occasionally you do other things. Like the Masquerade Ball for example.

All in all it’s a lot easier when someone else is doing the driving.

Though it can be a bit nippy on deck.

Especially during the Force 11 (Yes, ELEVEN!) that we sailed through. That is called a severe storm. (The scale only goes up to 12 – and that’s a hurricane!) 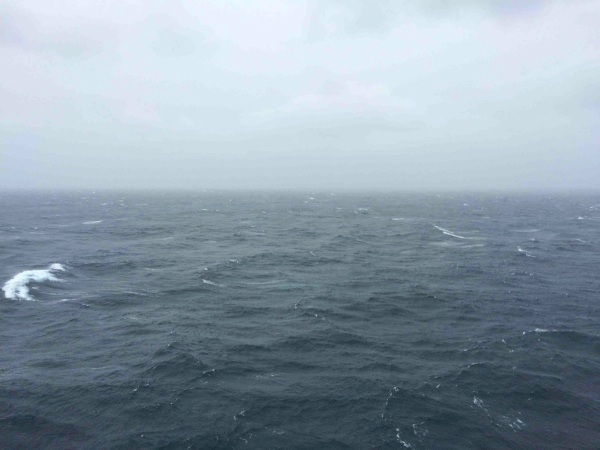 It doesn’t look so bad from the 8th floor, (for some reason storm photos never look as bad as they are – and it’s not just because sailors are natural exaggerators.) But if little Domini had been out in that we’d have been swamped.

It was a little disconcerting when the Captain came on the tannoy and said, “It may interest you to know that we are at this moment sailing over the final resting place of the Titanic.

“But do not worry, The Queen Mary is unsinkable.”

Ju let the captain know that he too was a sailor, and they only had to ask if they needed any help on the bridge. They seemed to manage OK without him, and even in the Force 11, the Queen Mary only rocked a little bit.

It’s all quite exhausting, what with the spa treatments, the massages, the pedicures, the steam room, and watching people working out in the gym.

And the decks are very long if you go for a walk. 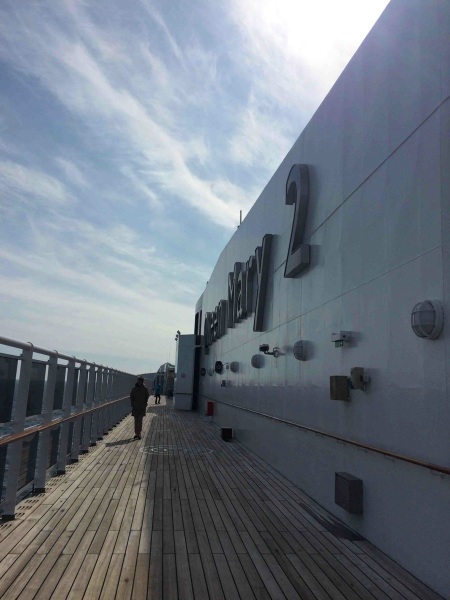 …and it takes ages to get to your room. 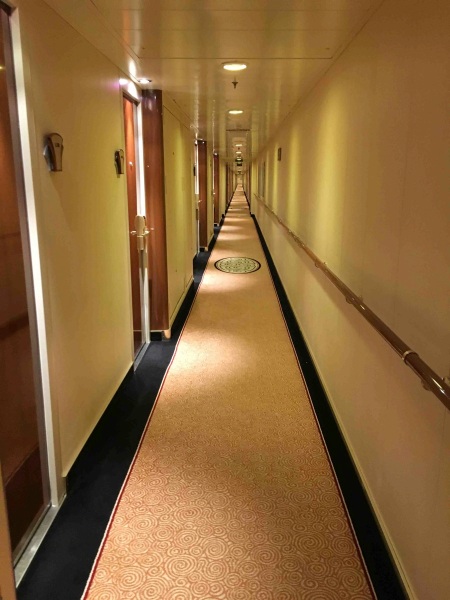 Do you know what these Henry Moore sculptures are of? 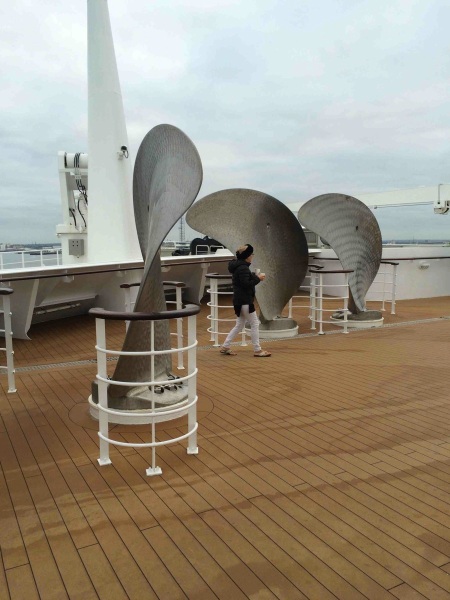 Answers to the Henry Moore Quiz.

Ha ha – fooled you. It’s actually neither. They weren’t made by Henry Moore at all, but by the shipyard. They are the spare propellor blades. Though if the propellor falls off, we’ve got no idea how they’re going to stick the new one back on. But unlike being on a little yacht – that’s not our problem!

So in eight days we went from here… 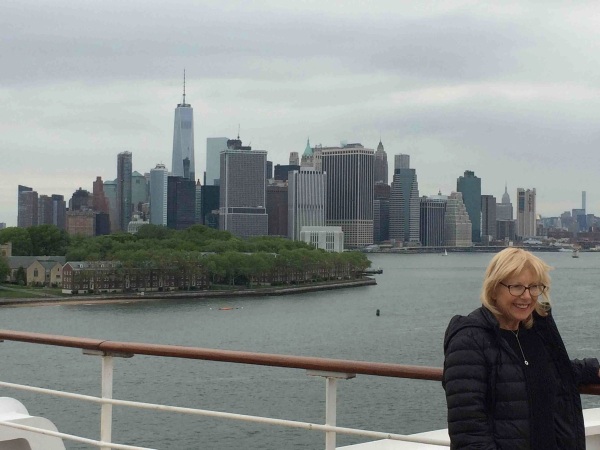 And Domini isn’t far behind us. She should arrive on Sunday night, ready for offloading sometime on Monday.

And then we can start all over again.

Just time for one arty farty photo. No need to tell you who took this one. It’s called Queen Mary’s Lift. 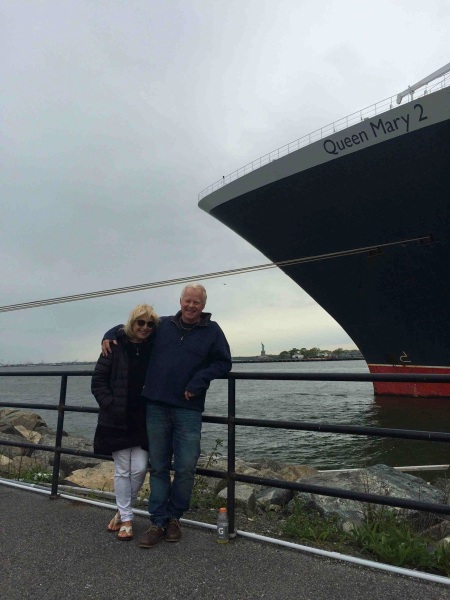 Welcome back Boatblog ®  fans, though perhaps this edition should be called The Car-blog, because we have temporarily abandoned the good ship Domini and for a short while have become landlubbers again.

In our last episode we left you in Los Galapagos. From there, we headed back to St Maarten, stopping briefly in Quayaquil in Ecuador, only narrowly missing the dreadful earthquake. This photo was taken about 12 hours before it hit.

We rejoined Domini, and after a couple of days of re-provisioning in St Maarten we sailed north to the BVI, and finally to the US Virgins, where we either sat on the beach or went out to the floating bar that you can see in the middle of the picture. 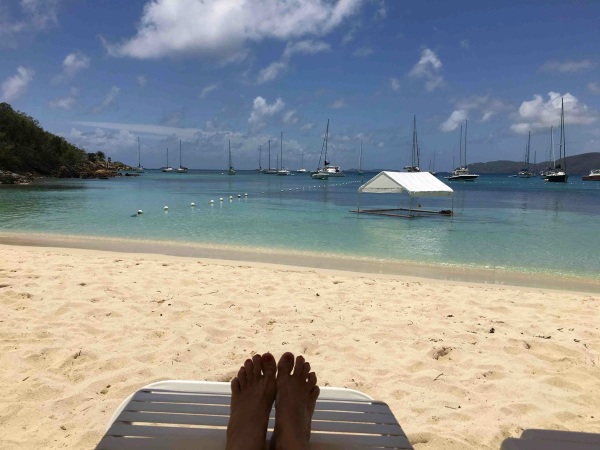 But it wasn’t all just lazing about in the sun. We had to get Domini prepared for our next adventure. We took off the sails, the bimini, the spray hood, all the safety gear on the back rail, even the davits, and lashed the dinghy to the deck.

By the time we’d finished, she looked quite naked.

Because first, we were going on a Road Trip. We’d read about the Lincoln Highway, which was the first road that went right across the States from Times Square in New York to San Francisco. And we decided to drive it.

Not all of it. That’s a long way. Instead we would join it about half way in Chicago, and head East towards The Big Apple.

So we flew to Chicago, where the first thing we did was…

Chicago is justly famous for its architecture, and the best way to see it is along the river. 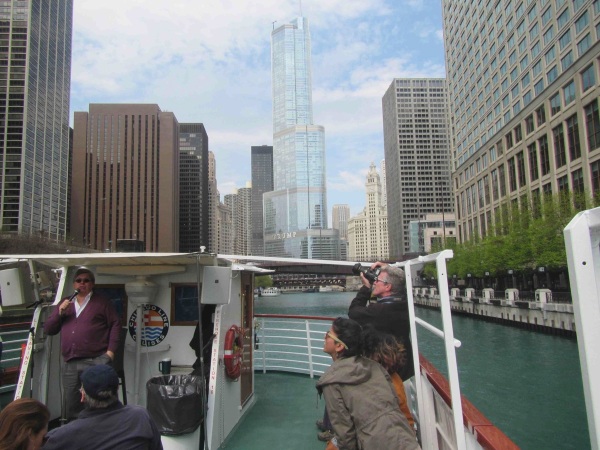 It says “Trump,'” on the tower up ahead so as we went past, we did. That might be why it’s called The Windy City.

Of course Sweet Home Chicago is most famous for the Blues… 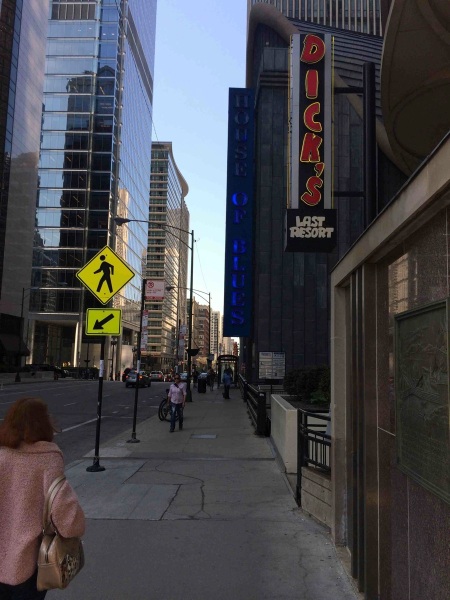 We’re on a mission from God.

You don’t see this outside many gigs.

…but at least there was no chicken wire.

Continuing our Musical Pilgrimage, we spent Sunday in the AIC with George.

For those of you that  didn’t get that brilliantly witty reference, this is the painting that inspired Sondheim’s masterpiece, Sunday in the Park With George, and is on display a the Art Institute of Chicago (AIC).

Once again the Boatblog ®  seeks to inform as well as entertain.

One of the great things about America, is that no matter how badly the diet is going… 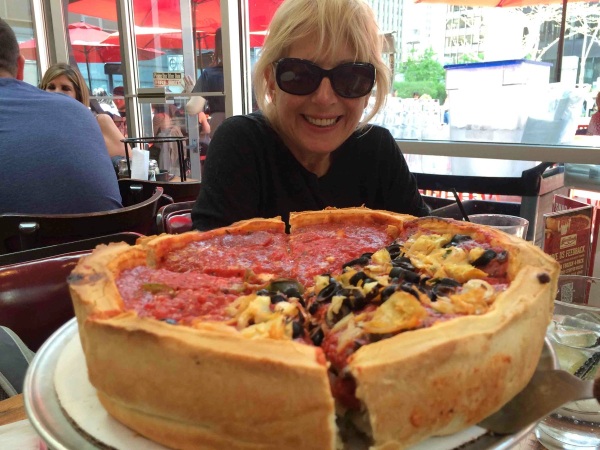 Chicago at night is pretty spectacular.

And pretty scary if you get too close to the window and look down.

We needed some kicks. So we hit the road.

We went from Illinois, through Indiana skirting along the Southern shore of Lake Michegan. This lake is huge. Big enough for waves! 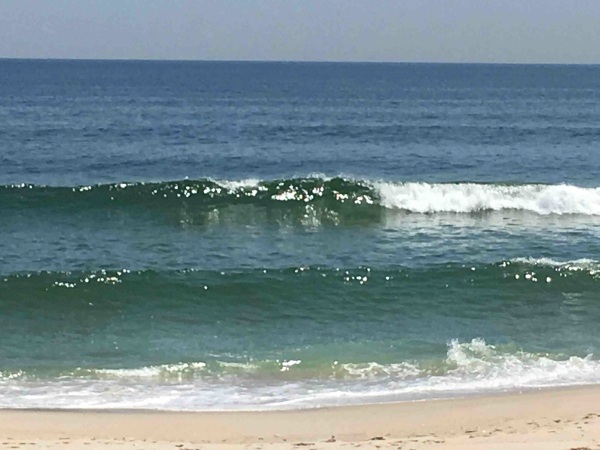 It was hard to believe that this was lake and not sea.

Quick quiz. Is the water salty, or fresh?

Go to the top of the class if you said fresh. Of course it is – it’s a lake. But even so it’s really weird being able to drink water from what look like the sea.

We stayed off the beaten track as much as possible.

The distances are big in America.

We went through Akron, Ohio… 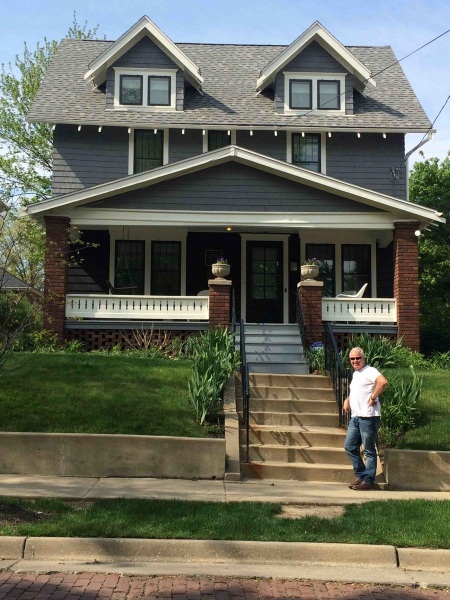 …to Pensylvania. We stopped at Gettysburg, scene of the largest battle in the American Civil War. This was the Gettysburg Address, 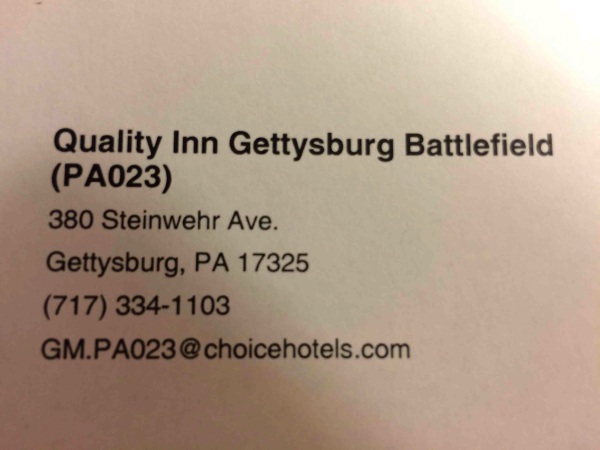 …and a very nice motel it was too.

Gettysburg is also famous for paranormal activity. Ju decided to go Ghostbusting, and spent a night in several haunted houses. This photograph was taken with a flash when he heard something creaking…

Do you see those spots floating about. Is it just dust on the lens?

So, from now on, if you have a problem with ghosts , Who you gonna call?

Incidentally, Lyn didn’t go because she said she thought it was all a load of old rubbish.

Or was she just frightened.

On to Philadelphia, where the Declaration of Independence was signed on July 4th 1776.

Bet they’re regretting that now. It’s also the home of the Liberty Bell.

We carried on East into Amish country, which is quite delightful. 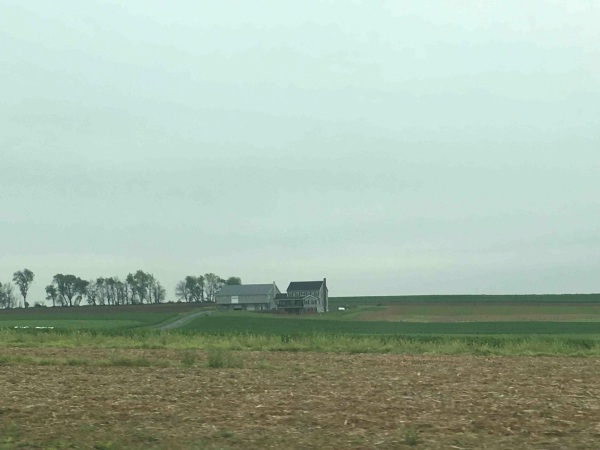 We stayed overnight with Ben & Emma who are Amish farmers. For those of you who haven’t seen Witness, the Amish still live in the traditional way without cars or electricity, making all their own clothes, and generally living a simple life without any mod cons.

Ben offered to take us out for a spin in his buggy, pulled along by his faithful horse, Misty. 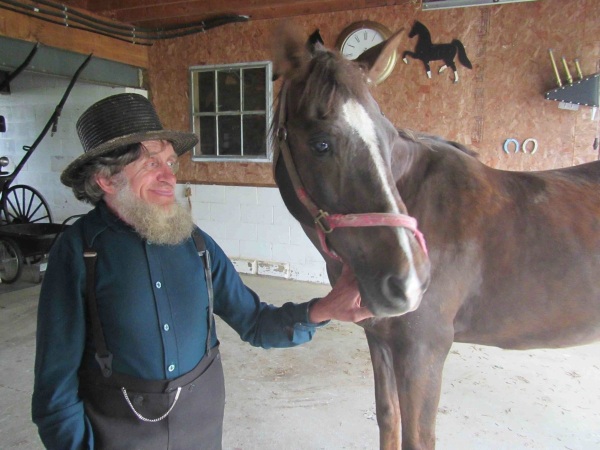 As we were guests, he took us out in the special buggy, usually reserved for Sundays.

Who needs a Porsche?

We found a space in the supermarket car park.

It’s amazing that they can maintain this way of life with all the pressures of the modern world.

This diner was great.

We half expected the Fonz to turn up.

Our next stop was Atlantic City, a big casino town, which after the simple world of the Amish people seemed a little crazy. 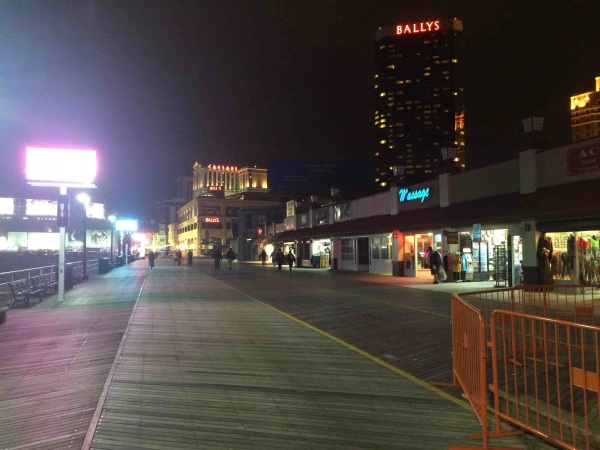 But it was kinda fun. 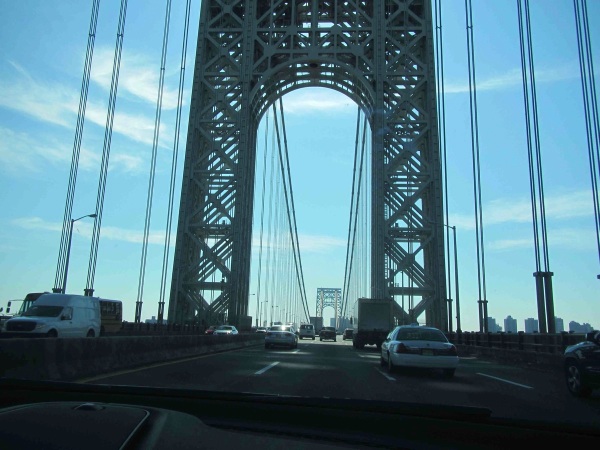 ..where we met up with Rory and Zoe who are currently living in the Bronx.

We went to see the Yankees play. 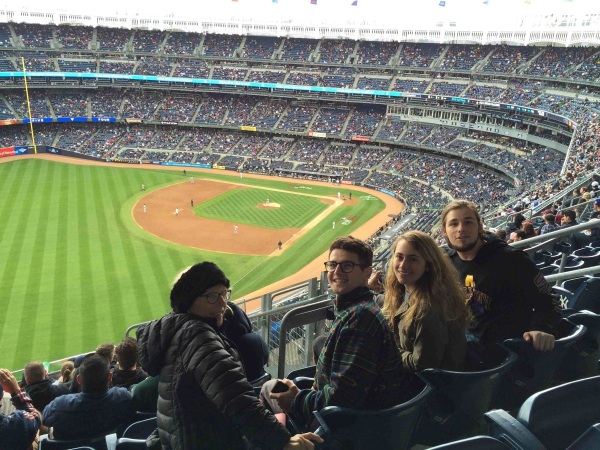 And went on a tour of the vintage clothes stores, called “thrift shops,” to get things for the next stage of the adventure…

(What could that be? – you’ll have to subscribe to the next instalment to find out.) 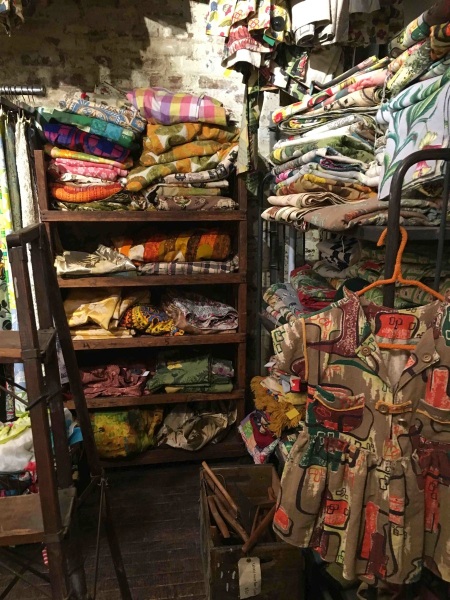 A postcard from Brooklyn.

…which is where they buried Miles Davis.

I never knew he was a Sir. It’s probably a Sir like Mr Ellington was a Duke, and the Mr Basie was a Count. Actually, Duke Ellington is buried here too, and a load of other famous jazzers.

Anyone know what that tune is? The prize for the first correct answer is a three day course in how to anti foul the bottom of a boat.

Talking of which, while we were messing about on the road, what was happening to Domini down in the USVI? And why had we stripped off all the sails and things?

She too was going on a trip. 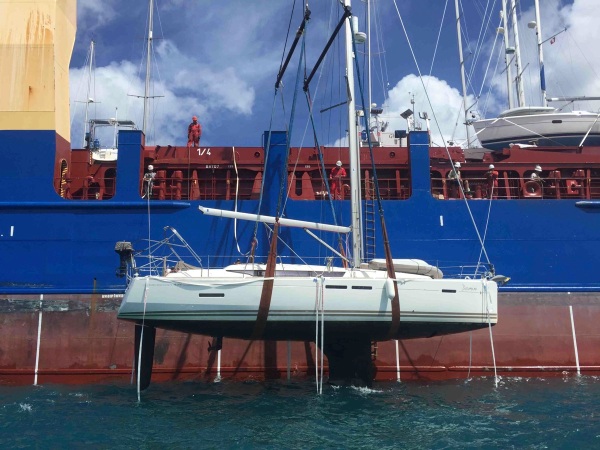 Don’t miss the next exciting instalment of The Boatblog ®  to find out.

But before we go, there is just time for the Arty Farty competition. This time, all the entries are by Lyn. The first is called Buttons in a Jar. 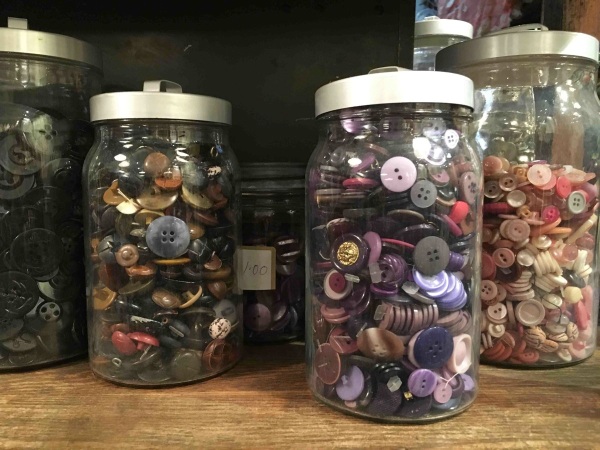 and the next is called Silver Bark.

…and finally…er….not sure what this is. Let’s call it Green Spotty Thing

And of course, one last sunset – this time courtesy of the US Virgin Islands. 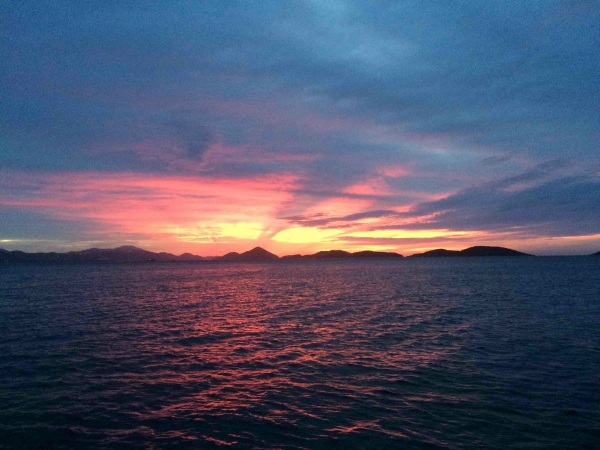 We’re going to miss those.