Hello again Boatbloggers ® and welcome back to another exciting adventure on the Seven Seas,

We call this episode Deja Vu because we have a strange feeling that we have been here before, which is no doubt because we have. We are following in the wake of our last voyage down the Caribbean, and heading south from St Lucia to Grenada where we are going to pick up our new crew; James & Emma and Alice & Ben.

But first we did a tour of St Lucia. It is strange, given that we spent such a long time here last year, that we didn’t get to see that much of the island. So we decided to put that right, booked a taxi and went exploring.

No trip to St Lucia would be complete without seeing Les Pitons (French for ‘The Pitons.’) 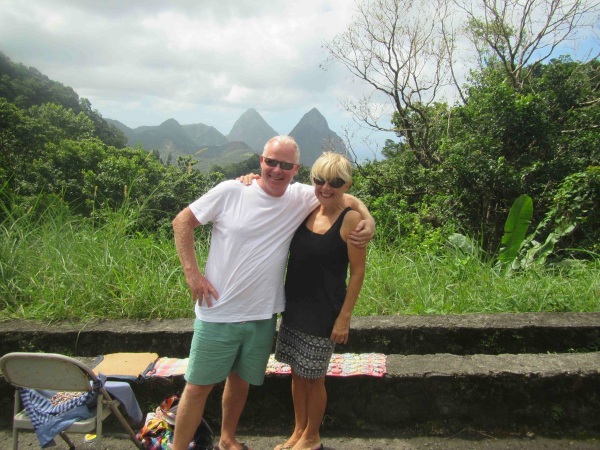 Two fossilised heaps shaped by many years of erosion, with The Pitons in the background. (Boom tisch!) We know it looks like Ju is falling over, but the road was on a bit of a slope.

Then on to the Drive-In Volcanos…

The key thing to notice in the sign above is the word, “sulphur.” The steaming rocks may look impressive…

…but it is the stench that is truly awe-inspiring.

Nevertheless, Ju decided to brave the mud baths. Apparently, the minerals in the mud make you look ten years younger, so he went in twice.

It’s hard to believe that this youthful specimen is actually 95.

Ju has a natural way with animals. This little bird came and drank the milk for his coffee… 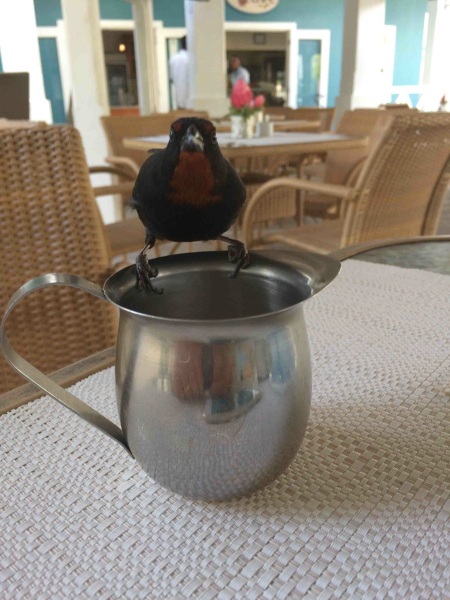 …and he wrestled this boa constrictor into submission.

But enough of this messing about. We’ve got to get south to meet our crew.

First stop was Bequia. It was quite a tough sail coming down; strong wide on the nose, but we’re getting use to that. Note the three reefs in the mainsail…

It may look calm here, but we’ve just come round the corner into the bay.

Not everyone made it.

But after a long day, we arrived safely.

The Captain found time to wave to the crowds, while the Crew carry on working.

The boat in before us had caught a fish. 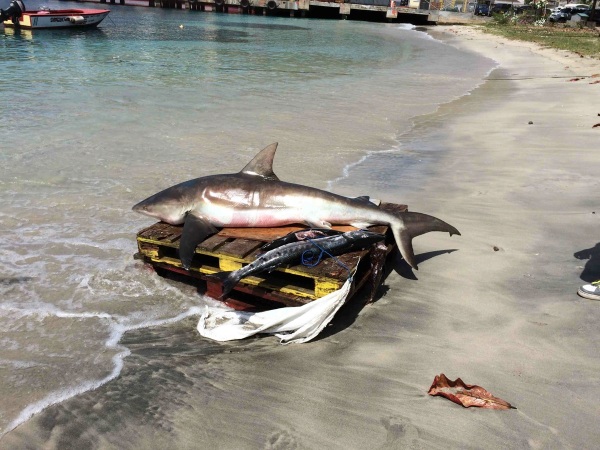 But then after just few days re-provisioning, re-fuelling and watering, we set sail again for Grenada, where we met many old friends from our last trip. We took them out for a day’s sail. 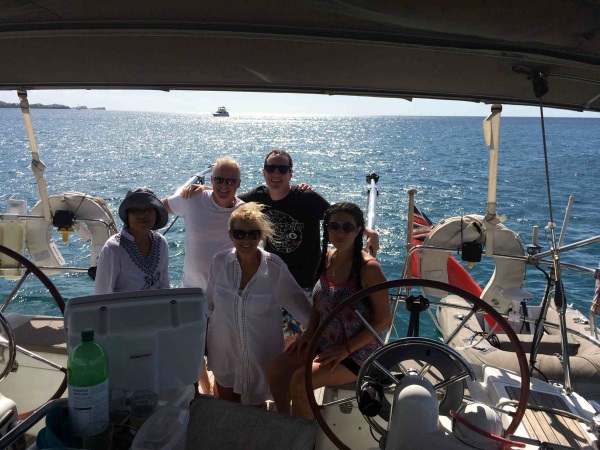 We also went for lunch with Chris and Helen Tibbs on their boat Taistealai. Chris was our (totally brilliant) weather router when we crossed the Atlantic, and has been selected for the Swiss Olympic Sailing Team in Rio. Now that we’ve done over 17,000 nautical miles, he wanted to meet up to get a few tips before the Games.

One night, we went to the movies.

Our group were the only ones in the cinema. It was like our own private viewing. (Hail Caesar, in case you’re interested. It’s great fun – go and see it if you get a chance.)

But before we close, here’s one last gratuitous shot of Domini racing into Bequia, included mainly because we paid 50EC$ to the bloke who took it.

Avast! No more blogging. We have just a couple of days to get the boat ready for the new crew’s arrival.