Welcome back to the latest edition of theboatblog.com.

We have certainly been racking up the nautical miles since the last issue. We are no longer in the Windward Islands, but have headed North and currently are at anchor in Little Bay, Montserrat.

It was last Wednesday we bid a sad farewell to Grenada which had been our home for a few weeks. We actually had to stay that long, because the diesel hose for the generator had sprung a leak and we needed to get it mended.

But if you have to wait to get a leak mended, you might as well do it in Grenada.

Because this is where they make the CHOCOLATE.

THIS IS HOW CHOCOLATE STARTS – bet you didn’t know that.

Not to mention the rum.

One day we went trekking through the rainforest… 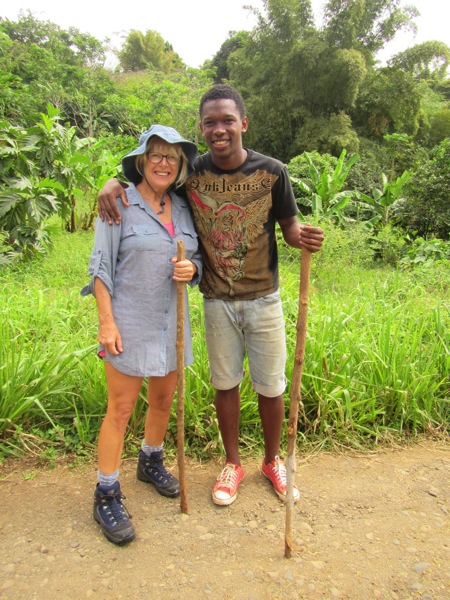 ..and ended up at a waterfall. 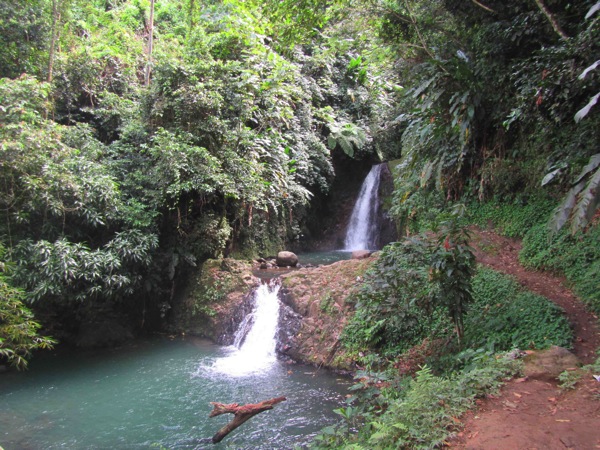 It would have been rude not to jump in…

They have great beaches… 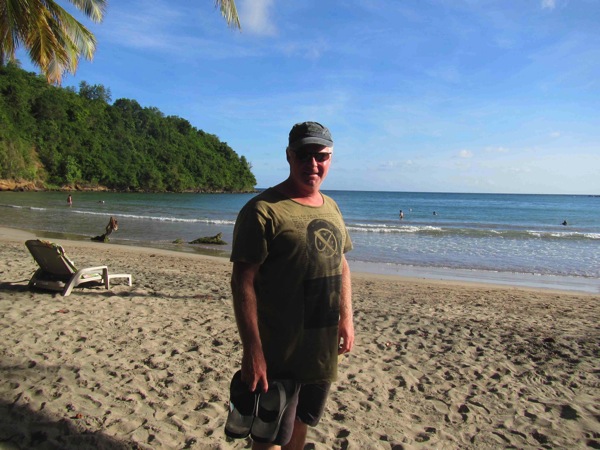 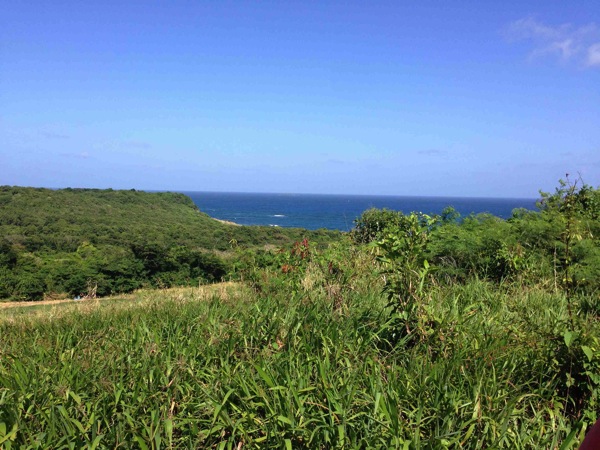 But it’s not all just fun and games. There is still high powered business to attend to.

A HARD DAY AT THE OFFICE

We were pleased that when the Getty’s heard we were in town, they insisted on parking their boat next to ours.

Anyway, time to move on. Our first stop was Carriacou, which is still part of Grenada and only about thirty miles north.

And then we left the Windward Islands, and set sail for Dominica. It was an overnight passage past all the Grenadines, St Vincent, St Lucia, Matinique until we arrived  in the Leeward Islands. I’ve no idea why they call them that. They’re a darn sight windier than the Windwards.

We rowed up the Indian River.. 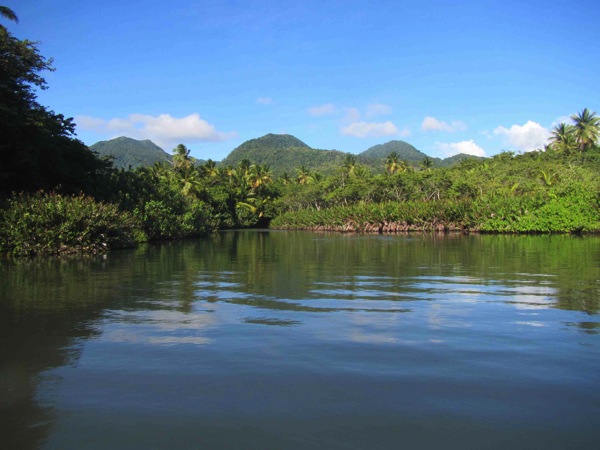 ..which is completely magical.

In fact it is a film set. They shot Pirates of the Caribbean here. 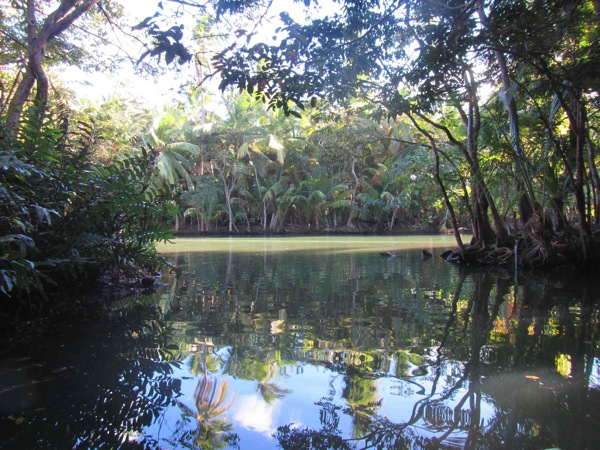 They don’t allow outboard engines, so the only way is to row. Which is exhausting.

So we got Martin to do it.

PARROTS OF THE CARIBBEAN 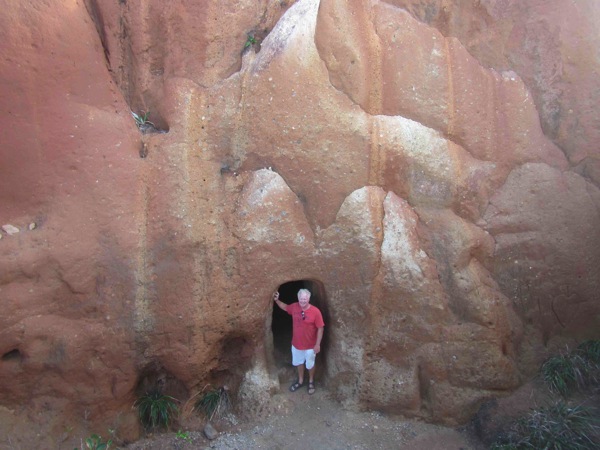 They call it the Nature Isle. 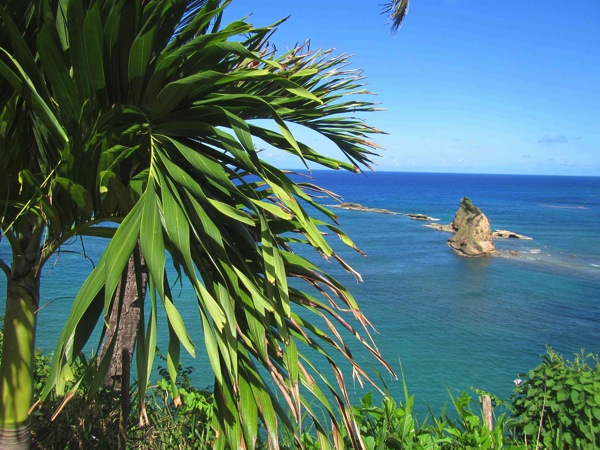 And it is. We were sorry to leave.

After Dominica, we sailed through another rainbow… 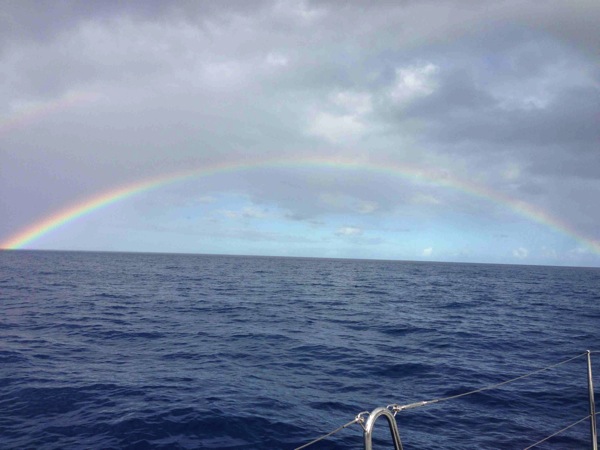 …to Guadeloupe, which is technically France, so they take Euros, speak French and take three hours to eat lunch.

We had a bit of a drama last night.

We were anchored at Deshaies in the north of the island. Roundabout midnight, a storm hit us. 30 knots of wind, and horizontal rain. We got up to double check everything was alright, and that was when we noticed that we were now perilously close to one of the other boats.

The anchor was dragging.

No time to lose. In the middle of this gale we weighed the anchor just in time to avoid hitting anything. But it was a close run thing. The French tend to anchor in the same way that they faites le camping. Right next to each other.

But that was just the start of the problems. Now we had to lay the anchor down again. It’s hard enough normally, but in 30 knots, terrible visibility, and surrounded by other boats it’s a nightmare.

Finally we managed to drop the anchor again. It appeared to be holding and all seemed well, so we decided to run an anchor watch and take turns to stay up and check that we didn’t drag again. It was all fine for an hour or two, but then on Ju’s watch a mega squall hit, and we started moving again. He called up Lyn to weigh anchor and start the whole process again, when suddenly we stopped.

The anchor must have dug itself in again!

Ha ha. Not so simple. It had caught on something, and was not budging.

Still, at least we were no longer moving. We decided to carry on the anchor watch and sort it out in the morning.

At long last the sun came up, and the storm died down. Ju dived down on the anchor to see what the problem was. We had snagged it on an ancient rusting bit of chain from a long abandoned mooring bouy, and it was not coming off without a struggle. It was about 8m down, so Ju took a deep breath and dived down with a piece of rope which he managed to slip around the rusty chain and bring back to the boat. What a hero! This held the chain up, so all we had to do was lower the anchor, then motor forward till it was clear of the chain and we could haul it up.

At least that was the theory.

And the theory worked!

This is a remarkable island. 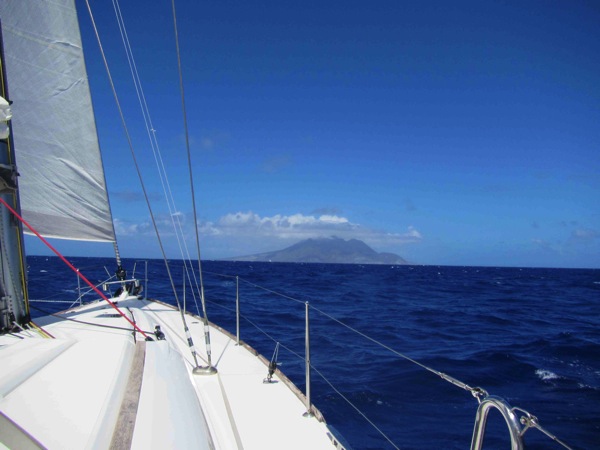 In 1997, the volcano in the south erupted. You can still see  steam coming out of it now.

The devastation is hard to comprehend. This is the capital, Plymouth. 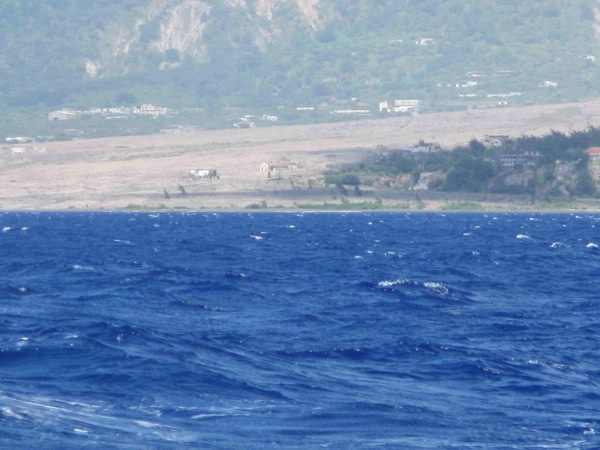 It looks like a nuclear bomb has been dropped; the houses all buried in ash and lava. It’s hard to tell in the photo, but the church is buried up to its steeple.

And it is from here, in the north of Montserrat  and about ten miles from the volcano, that we send you this blog.

But to finish, this issue’s arty fart prize goes to Lyn, for her study entitled simply. Coffee.

By the time you read this, we should be on the way to Nevis.

And greetings once more from sunny Grenada where, unlike our friends in the UK, we are sweltering in the heat.

The big news for this instalment of The Boatblog ® is that Ju and Lyn are no longer just a pair of middle aged cruisers (or “yachties” as some prefer to be called, in the hope of sounding less sleazy). We are now officially racers, and have a nice red shiny cap to prove it. 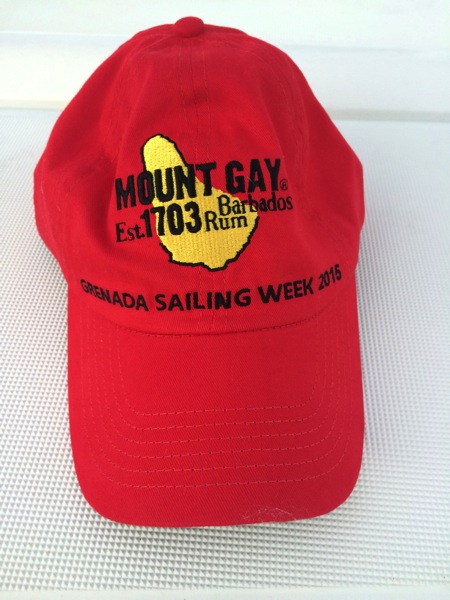 As luck would have it, we arrived in Grenada just in time for the start of Grenada Sailing Week. And not only that, it was all scheduled to start in Port Louis Marina, where we just so happened to be berthed.

This is the classic yacht, Galatea. She is an absolute beauty. Built in 1899 she has sailed all over the world. And when I say sailed, I really mean sailed. She does not have an engine. 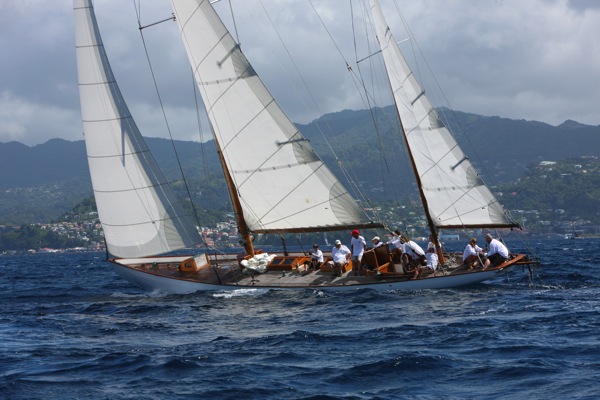 She is owned and skippered by master mariner Judd Tinius…

For our landlubber friends, I should explain the significance of not having an engine. Berthing (that’s parking to you) is one of the most difficult things to do with a boat, and is often a source of much hilarity for onlookers in the nearby bar. And that’s with an engine. Coming alongside, or up to a buoy under sail is virtually impossible, and something you only ever do in a dire emergency, or if you’re doing your Yachtmaster exam which is the same sort of thing. But of course Judd has to do it all the time, and just makes it all look sooooo easy.

Anyway,Galatea had come to Grenada to enter the regatta, and ended up berthed right next to us in the marina. And we would like to be able to say that Judd immediately spotted our sailing prowess and insisted that we help him crew his boat in the forthcoming race. But that wouldn’t be true.

(I know that at theboatblog.com we don’t normally let the truth get in the way of a good story, but in this case we know that some of the crew of Galetea will be reading it)

What actually happened was that he needed someone to help pull the boat off the dock with the dinghy (remember – no engine) so Ju stopped munching his bacon sarnie and offered to help.

And off they went for the first day’s racing, while Ju brought the dinghy back to the dock.

And they managed a very respectable second place.

On day two, Judd invited us to come along and crew for him, and of course we leapt at the chance. Unfortunately Lyn wasn’t too well that day, but Ju went along anyway.

It’s very exciting being on a proper racing boat, and especially a classic like this. You go incredibly fast…

…and tip over a lot. 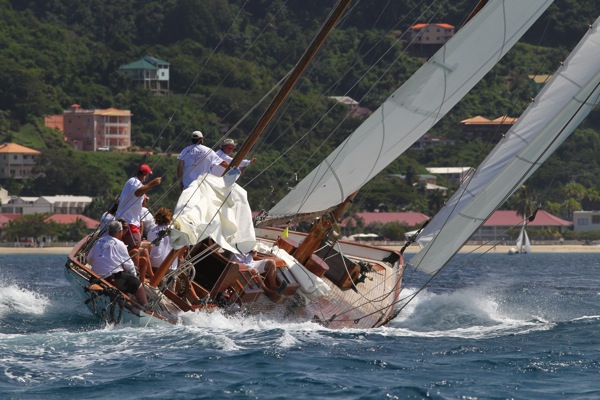 In the picture above those are Ju’s knees in between the two hatches. You can just about make out the camera in his hand as he takes this picture… 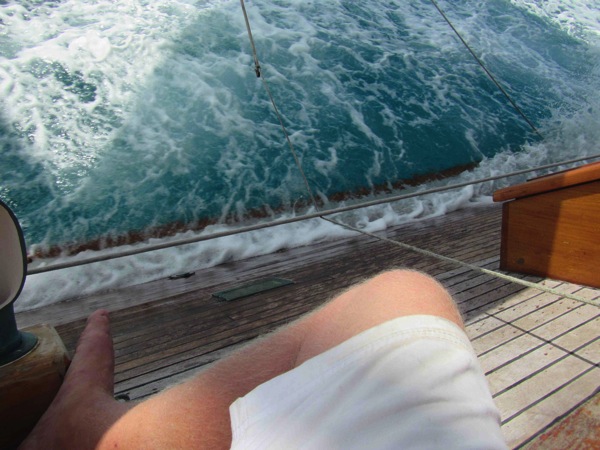 Now that’s what I call tipped over.

But it is all fantastic fun.

Now, I don’t want to take all the credit but with me helping on the second day, Galatea managed to come in 1st place!

On the third day, Lyn came too.

It was vital for us to win this day’s race if were to stand a chance of being overall winners.

It was a really close run thing. All the way round the course, we were neck and neck with the other classic boats, Blue Peter  and Coral of Cowes. 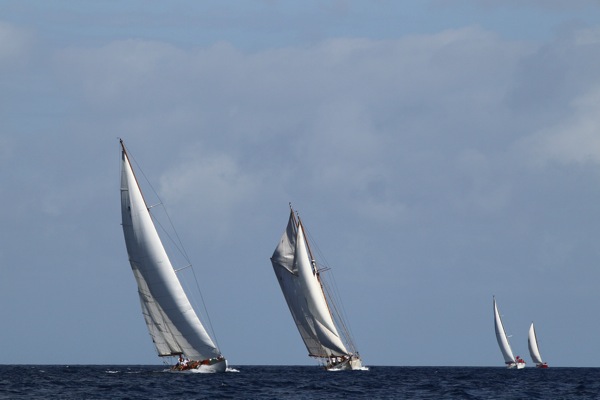 It was the second to last leg, and gradually we managed to squeeze into the lead…

We put a couple of boat lengths in between us and Coral of Cowes….

When all of a sudden… 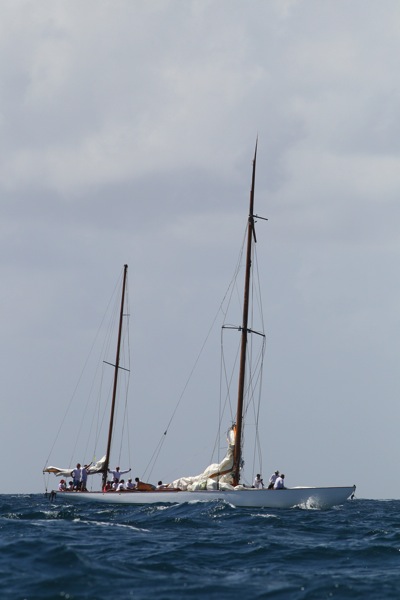 No one was hurt, so we pulled the sails out of the water and tied them down,

..and were towed back into the harbour.

The whole of the mast from above the second spreader had collapsed and broken in two. 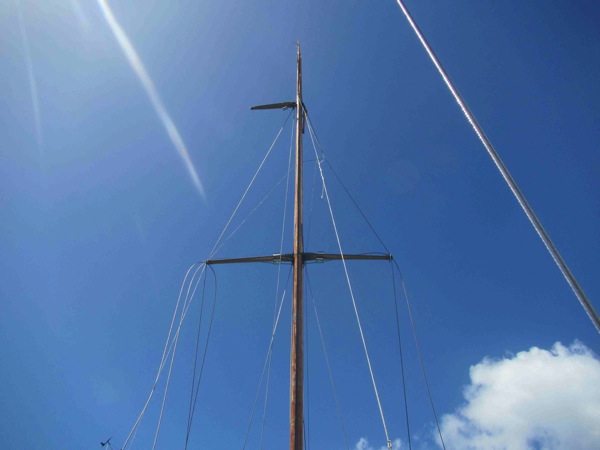 So that was us out of the competition.

Nothing stops Galatea. Overnight, and against all expectations, Judd and the rest of the crew managed to  rig up a new forestay, and repair the damaged mainsail in time for the fourth day’s racing.

So off we went with a short mast, a deep reefed mainsail, and the staysail for a jib. 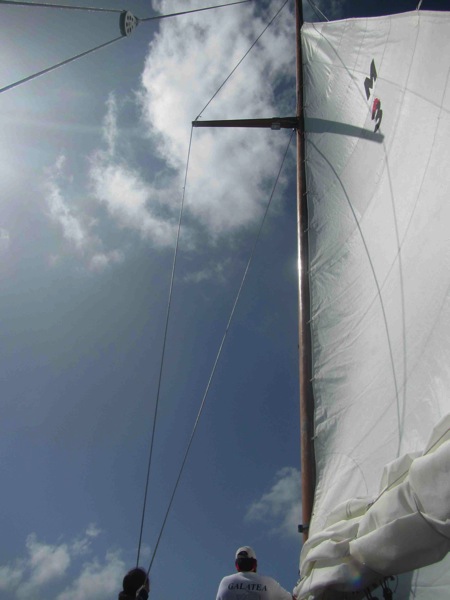 We knew we couldn’t win, but that wasn’t the point. We went out and we completed the course.

And overall we achieved a fantastic 3rd place. As well as an extra special award for Sportsmanship.

So we’d just like to finish with a huge THANK YOU to Judd and all the amazing crew for making us so welcome on board, for teaching us so much, and for giving us such a good time.

We have just come across some extra photos of Joe waterski-ing when he was here with us in St Lucia, and just knew you would want to see them.

We were amazed. We had no idea he could do this.

So, a little later than advertised, here they are… 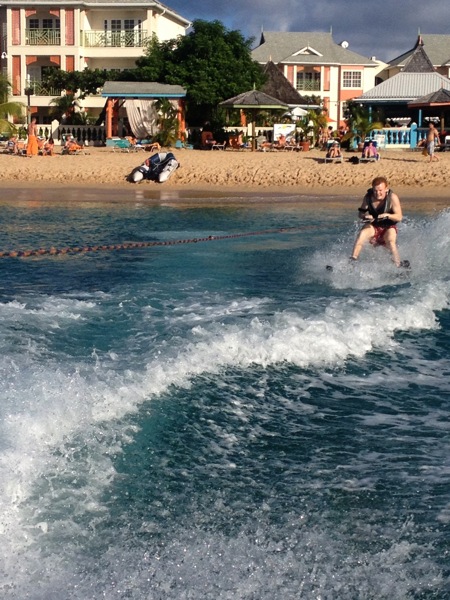 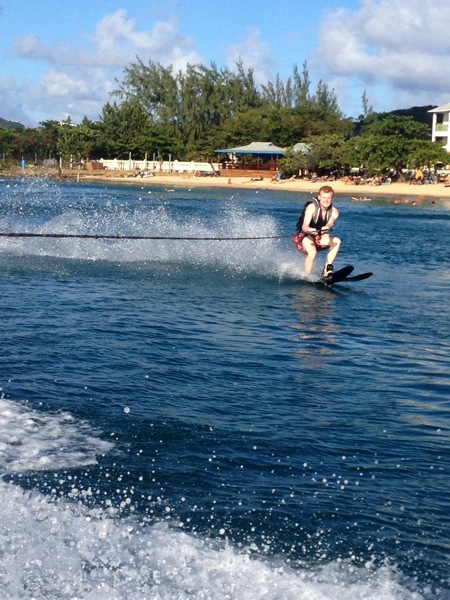 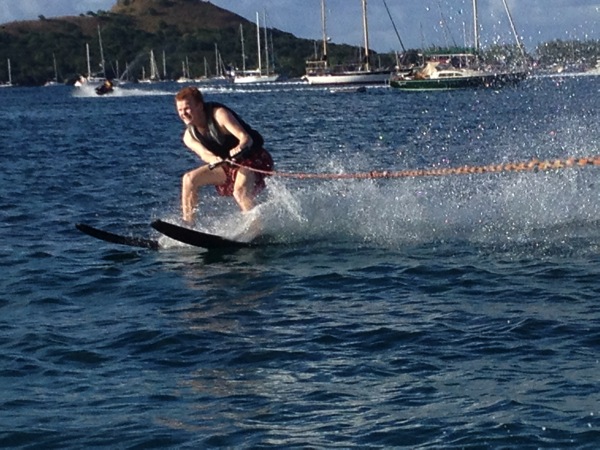