When we last wrote, we were stuck in the Virgin Islands waiting for a decent weather window to get to Antigua. Well, the wind never did quite come from where we wanted it to, but we set off anyway, thinking that the rainbow was a good omen.

We decided to break the trip up with a stop at St Maarten. (I’m not sure if I’ve mentioned it before, but in case not, it was here that we came FIRST in the Heineken Regatta.)

A lot of other people had the same idea, including Steve Jobs. Well, probably not him personally seeing as how he’s dead, but nevertheless he parked his $100,000,000 superyacht next to ours. I expect he wanted to make a good impression.

Very nice, though to be honest, we though it just looked like a big iPhone 6. Apparently, to make it work you have to keep switching it on and off.

In case you didn’t know, St Maarten is split down the middle and is half dutch and half French. This time we spent more time on the French side of the island than the Dutch side. The food was better, but there were less tulips.

A VIEW FROM THE ESTAMINET

We couldn’t stay long. We had a flight to catch, so after just a few days we set sail again to Antigua. Once again we were beating all the way. You would think you’d get used to it. But you don’t…

We anchored up in Jolly Harbour, and it was here that we realised our transmission had gone. This meant we couldn’t motor forward, and had to go everywhere in reverse. As Ju thought, it was the drive cone and shifter that were knackered. These are relatively small parts costing a few hundred dollars. Unfortunately, being a boat, the only way to get at them is to take the boat out of the water, at enormous expense.

Once you’ve done that you then have to take the engine out, then the sail drive and finally you can begin work on what is otherwise a relatively simple job. But not one for Ju.

So we got Ivan at Extreme Marine to do it.

And that is how a $200 lump of metal no bigger than your fist ends up costing two thousand dollars to replace. No wonder Ivan is smiling.

Fellow cruisers – Ivan is brilliant. If you need a repair doing in Jolly Harbour, go and see this man!

While Ivan was busy mending our boat, we flew home for Christmas. We’d rented a cottage down in Devon, and had a week there with all the family.

It was nice going for walks along the English beaches. Now I’m not one to criticise the Old Country, but… 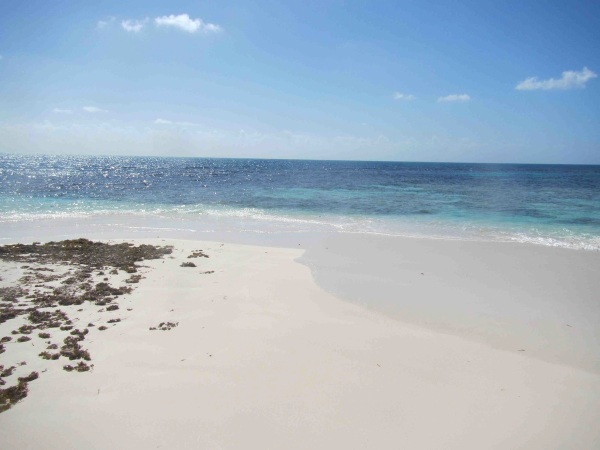 There is a major sea pollution issue in Teignmouth, caused not as you would expect by oil spills and the like, but by something much more insidious…

Sadly we had to leave England, and head back to the Caribbean.(Aaaaah.) Unfortunately Domini was still out of the water, so we decided to go to Montserrat while Ivan carried on with the tricky stuff. We had passed it last year and anchored offshore, but had not been able to land because the anchorage was deep and not well protected. This time we decided to go by ferry, and stay at a place called Gingerbread Hill. It was delightful.

ON THE VERANDA OF OUR VILLA AT “GINGERBREAD HILL.”

Montserrat was devastated a few years ago when the volcano erupted. That’s it you can see blowing out smoke behind us. 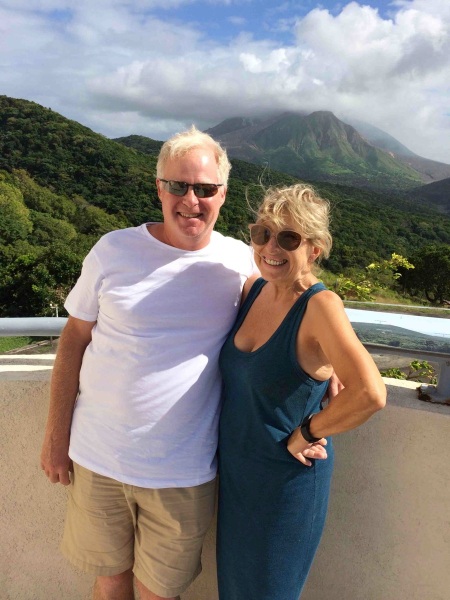 It’s still active, and they won’t let you get too close.

Though a bit of prosecution is probably the least of your worries if the volcano goes off.

This is all that is left of Plymouth, the capital city. It’s been buried under dust. It’s tragic when you see the photos of how it was before. 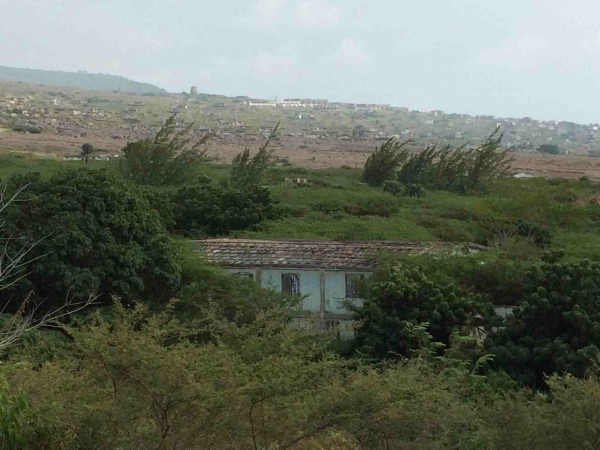 And this was one of the island’s famous luxury 5* hotels, The Montserrat Springs.

Ju found this in one of the rooms. 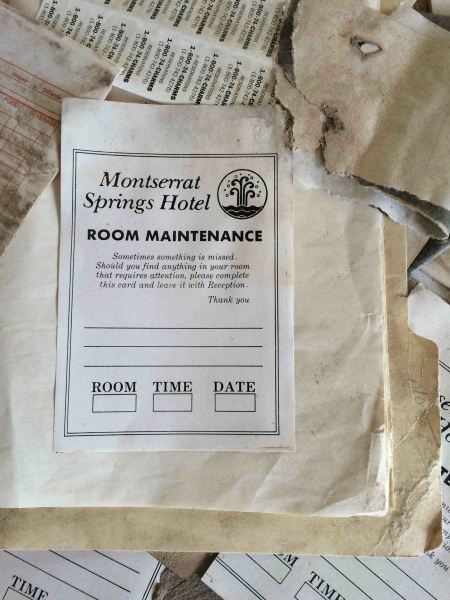 Dear Room Maintenance. There appears to be a volcano in my room.

The swimming pool was no longer so inviting.

And this is all that is left of the George Martin’s legendary Air Studios, Montserrat.

This is where the likes of Sting, Paul McCartney, Stevie Wonder and now Ju have recorded.

It might be that Ju is now one of a very few select group of musicians who have recorded at all three Air Studios. He has recorded at Air on Oxford Street, Air Lyndhurst and now this. Not one to brag, but….

It’s a lovely island, with charming and it must be said, resilient people, and we were sorry to leave.

Which we did on a plane as the ferries weren’t running. 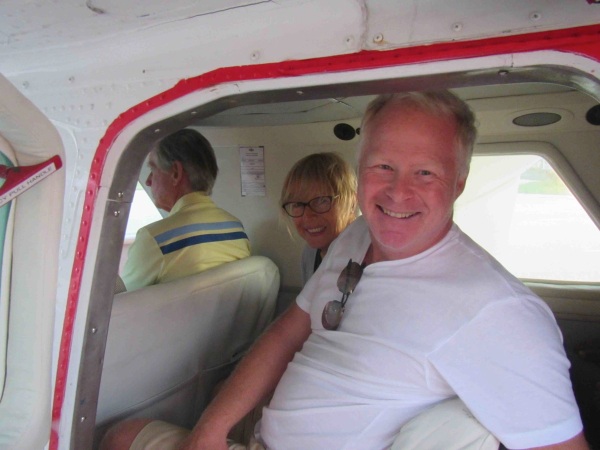 A Smart car of planes.

And so back to Antigua, where Domini was now back in the water. 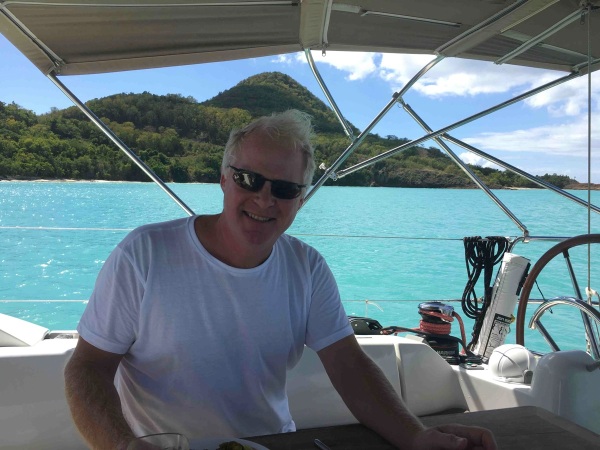 And so were we…

One way or another. 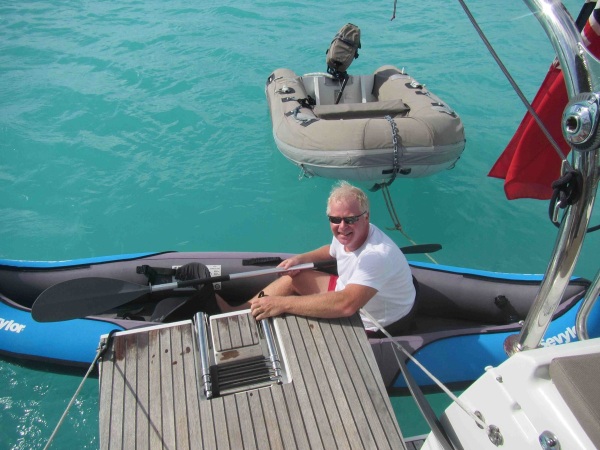 Ju met with Gavin on Secret Smile, who is a fantastic jazz sax player, and they did a few gigs together. 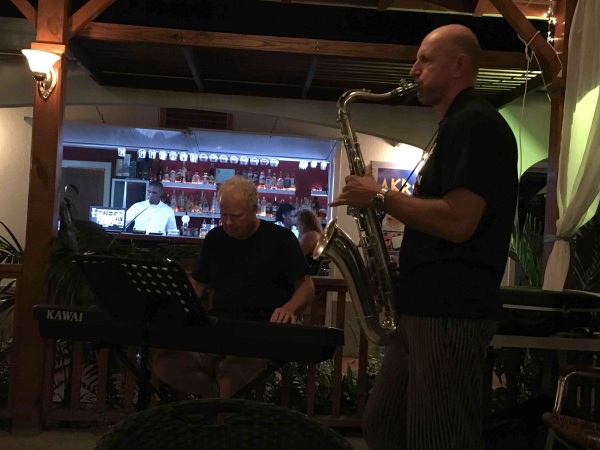 Gavin used to be a Major in the British Army, so if the audience didn’t clap he could kill ’em. Of course it’s not all glamour.

One day we’ll have roadies.

But now we have to make our way south to Grenada, because James and Emma are coming out to visit us again.

Which is tres Francais. 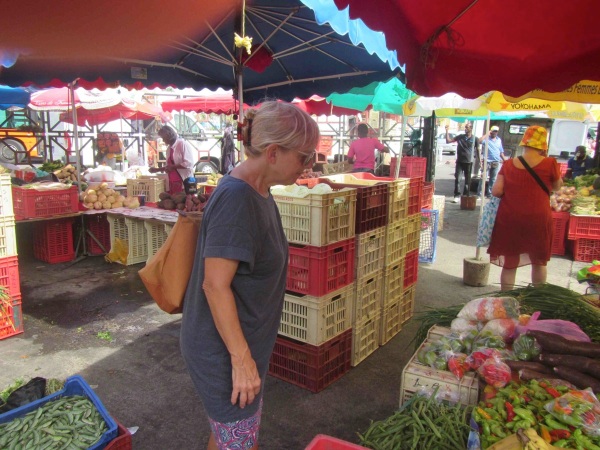 We could be in St Tropez.

We couldn’t stay too long, as we needed to move on to avoid a storm, and so here we are, back where our Caribbean adventure began in December 2015 – St Lucia.

And this episode’s arty farty prize is a tie between Ju and Lyn. Bottle Bank and Rainbow.