And once again thanks for all the feedback and comments. In response to Alan’s remarks, it’s not the waves that worry us Al – it’s the WILDLIFE!!!

Now you know me – I’m not one to over-dramatise a situation. So there we were, anchored in Columbier Bay on the North West coast of St Barts. A bay known for its rich profusion of wildlife – in particular the turtles.We could see their heads poking up out of the water all around us, so we thought we’d go for a snorkel with them.

Ju climbed down the ladder on the transom (that’s the bit at the back, my landlubber friends) and peered into the depths. When all of a sudden…

He saw, right next to the keel…

Now it might not be a Great White, but it still has big teeth. And I would like to point out that the photos make it look a LOT smaller than it really was.

He waited on the ladder ready to jump back on the boat as soon as it started to look hungry. But after a while it seemed like it wasn’t doing any harm, so once he’d stopped hyper-ventilating through his snorkel he swam off to look for turtles.

And there were plenty of them.

…and thousands of starfish. 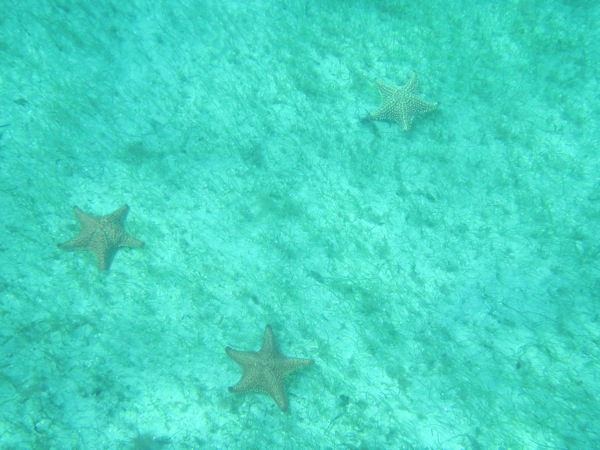 But soon it was time to return. It was a little bit worrying swimming back to where the shark was, but the Jacques Cousteau in him realised zat somehow he must get back on ze boat…

So imagine his surprise when he found…

All of a sudden, one of them shot out to grab a passing fish. We have never seen anything go from nought to sixty so fast. Apart from Ju climbing back up the ladder.

St Barts itself is an amazing island; very different from the other islands we have been to. For a start it is French, but it is also the playground for the super wealthy. The sudden contrast with the other islands was a little unsettling.

There are streets of designer shops, and the sort of designer shops that are SO exclusive that you’ve not even heard of them. Rolex and Armani looked cheapskate. The locals thought that our clothes must be really upmarket, because they’d never heard of Primark.

But it was all very nice, and once I had arranged a bank loan we went for a coffee and a croissant. 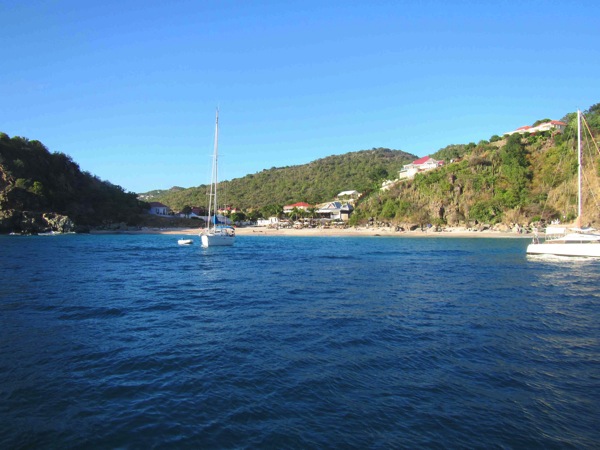 SHELL BEACH – THE ANCHORAGE IN ST BARTS. A beach made entirely of shells.

But before we got to St Barts, we had called in at Nevis and St Kitts. The crossing between islands has been pretty rough in the last few weeks, and thirty knots of breeze (that’s what we sailors call ‘wind,’) is not uncommon.

Nevis is a very nice place to go, with botanical gardens… 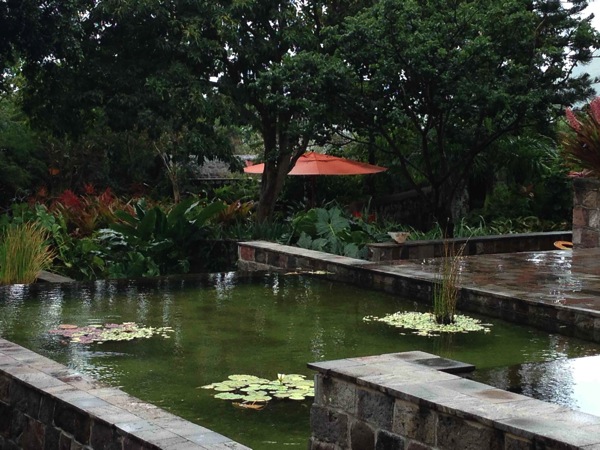 St Kitts is about 6 miles away as the shark swims…

ST KITTS AS SEEN FROM NEVIS

This is Domini at anchor from the top of the hill in St Kitts. Next to Robert Redford’s house. (He wasn’t in)

And this is the same place from ground level. 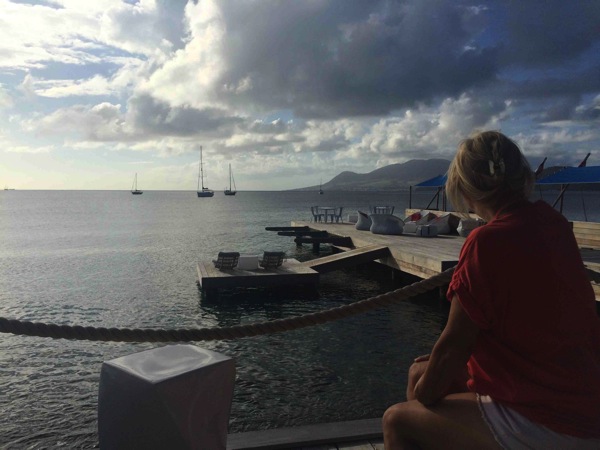 And now we are off to St Maarten to enter the Heineken Regatta with our friends Stuart and Anne Letton from Time Bandit and Dave and Lynda Witham from Purrfect.

ON THE WAY TO ST MAARTEN (Courtesy of Time Bandit)

And this weeks award for best Arty Farty picture goes to Lyn for her work entitled “Happy Hour.”

We’ll let you know how we get on in the Regatta.