We have just crossed The Pacific Ocean.

Well, that’s not quite true. We have crossed about half the Pacific Ocean, which is still a bloody long way. Further than The Atlantic in fact. We have just got in to Tahiti and all in all it was nearly 4,000 miles from The Galapagos. And quite an adventure it was. So without more ado, here are…

If you’re crossing the Pacific, or anywhere else for that matter, Domini’s FIRST Top Tip is to book our friend Chris Tibbs to do your weather routing.

He is brilliant. For those landlubbers out there, a weather router not only does the weather forecast for where you are, but also tells you the best route to go to avoid all the storms and calms. Chris is famous in the yachting world, and has written all the top sailing weather books, worked for the Met Office, and as a sailor has gone round the world more times than the moon. So he’s coming along. As well as the routing for Domini, which he is particularly proud of, Chris does the routing for the Swiss Olympic Sailing Team. A role that we suspect he got because of a recommendation made here on the Boatblog®.

Don’t go to sea without him!

And Domini’s SECOND Top Tip for crossing the Pacific is Do It With the World ARC.

Oooh – controversial stuff!!! Lots of our sailor friends will disagree with this – you know who you are!

But let me tell you a story.

We almost didn’t get started on this, the longest leg of the World ARC. We were about to weigh the anchor and get ready to cross the start line, when we decided to do one last check of our emails. There was one from Catana, the people that made our boat. Apparently there was a recall on our escape hatches. Those are the little windows on the bottom of the boat that are there in case we should ever capsize and need to escape. Apparently the glass on some of these particular hatches has been falling out and we should definitely not put to sea until we had installed the modification kit – we could sink! Catana would send out the modification kit straight away, but it would take at least 10 days for it to arrive from France to The Galapagos.

In the mean time they sent me a technical drawing of what I needed to do, in case I could make my own modification kit. 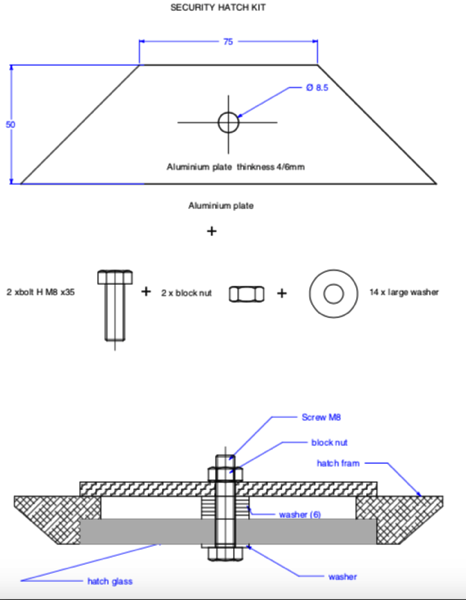 What an earth is that?

Those of you that know Ju’s metalworking skills will realise that this is a completely meaningless piece of paper. All he could tell was that even if he could get the parts, he would still have to drill through the hatch glass, which filled everyone with horror. Bear in mind, Ju is the man who once plumbed the washing machine into the gas main.

So we were going to miss the start.

By at least ten days.

I called up WARC Rally Control on the VHF to tell them the bad news. And fortunately, some of the WARC fleet listened in to the conversation, in particular, Alan on Island Wanderer. Now Alan, in his previous life, had been an industrial engineer and owned a factory that made things out of metal, and he was able to look at the technical drawing as though it was a musical score and knew what it all meant. He explained it all Ju who nodded and tried not to look bewildered. If only we had the aluminium, Alan could knock it up in a couple of hours.

But where to get the aluminium!

Once again the fleet came up trumps. Karl on Remedy had been listening in to the VHF conversation too, and as it happened he had some spare aluminium on board.

Anyway, to cut a long story short, about half an hour later, Alan and Colin from Island Wanderer had set up a metal workshop in the children’s playground in Santa Cruz.

Once they’d made the parts that were needed, all Ju had to do was drill through the hatches and attach them.

They came back to Domini and fitted them for us. Even though it meant delaying their own start.

Great work Alan & Colin. Thank you very much. And thanks to Karl for the aluminium.

And it was a good job we fitted the modification. As it turned out, a few days into the crossing the glass from the hatch started to come away, and without these bits of aluminium, it would have fallen out.

For you landlubbers let me explain the enormity of what happened. We are on a tiny island, known more for it’s blue footed boobies than its metal work shops, and within five hours of receiving the email from Catana we had our hatches modified so we could put to sea. We couldn’t have done that if we had been in Portsmouth Naval Dockyard, let alone in the middle of nowhere.

So off we went.

On first inspection, The Pacific is very similar to The Atlantic. 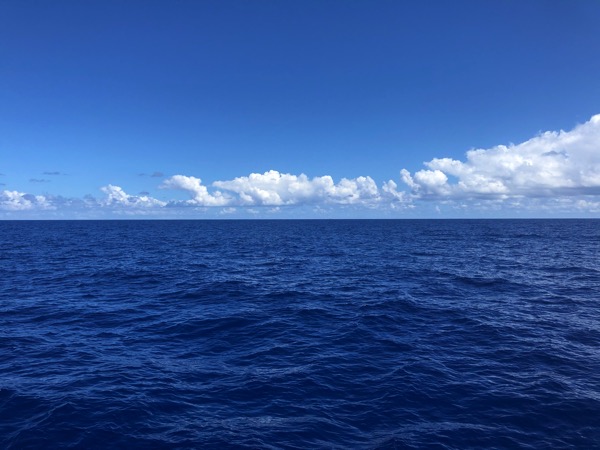 Though to start off with there seemed to be more wildlife. We saw manta rays jumping, a couple of whales and loads of dolphins. As well as the usual flocks of flying fish. I’m afraid we didn’t get any pictures of them, as they are a bit fast, but we have lots of photos like this.

In fact four week’s worth of photos like this. But don’t worry Boatblog® fans – we won’t post them all.

Well – maybe some of the sunsets.

We have to keep a twenty four hour watch, so we take it in turns through the night. Four hours on, four hours off.

It was all going very nicely, when after a couple of weeks at sea and as we were nearing The Marquesas, a little island group in French Polynesia, we started getting emails from Rally Control.

Unbeknown to us, the world had apparently caught the Corona Virus and had changed in ways we couldn’t begin to imagine. We could no longer stop in Hiva Oa, our intended landfall, as it was in lockdown and not accepting foreign boats. Which is fair enough. French Polynesia has quite a history of Europeans turning up with infectious diseases that wipe out the local populations. 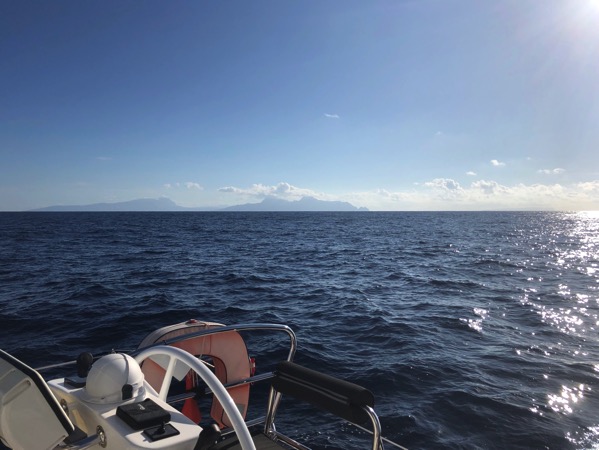 So we couldn’t stop there, but apparently we could go to the island of Nuku Hiva instead.

But then another message – the authorities had changed the rules again. French Polynesia were now shut to all inter-island traffic, planes, ferries and of course yachts. If we landed at Nuku Hiva, that is where we would have to stay. Rally Control advised going on to Papeete in Tahiti.

So we sent course for Tahiti, which was an extra 1,000 miles further on. The only problem now was that the wind was dropping, and even the mighty Chris Tibbs couldn’t do anything about that. Also, even with our reserve jerry cans, we were running low on fuel so we couldn’t just motor.

…and for a couple of days we had to bob about like the sailors of old caught in the Doldrums.

But the sunsets were still glorious.

And we met up again with Island Wanderer. 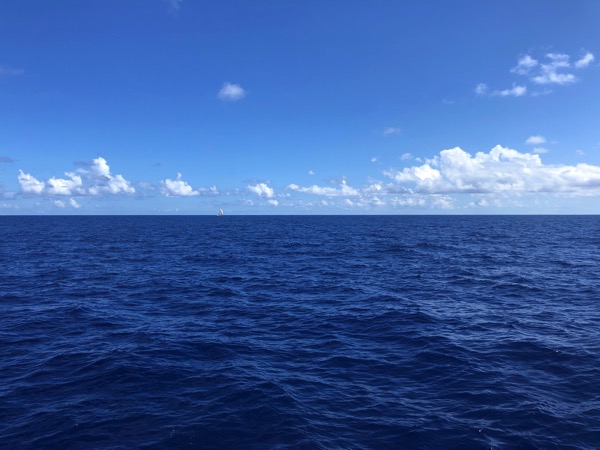 You can just see them on the horizon.

It wasn’t long before we were going through The Tuamotus.

These looked like the prettiest atolls ever, and it was terrible to have to just sail through them and not be allowed to land.

Land Ahoy! Eventually, after 26 days at sea we saw Tahiti in the distance. 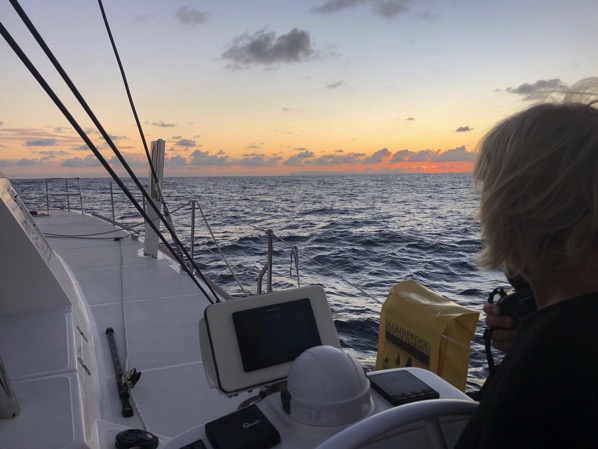 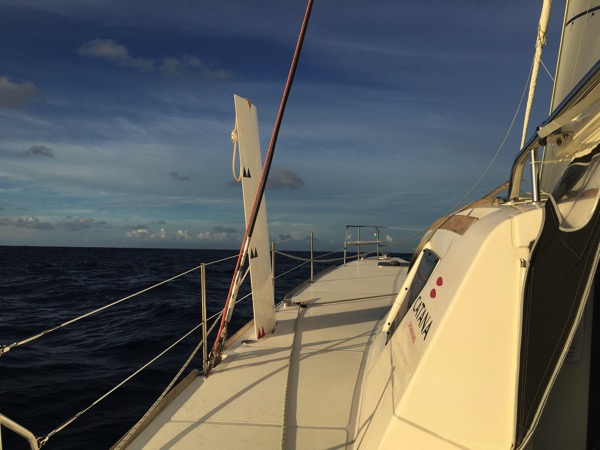 Even the birds came to say, “Bonjour.”

When we arrived, we knew we were in France. Ju called up the marina to get our berth. It was five to twelve.

“I am sorry, you will ‘ave to anchor for a few hours.”

“We’ve been at sea for four weeks.”

“But it eez lunchtime.”

So we anchored and waited for the end of lunch. Bon appetit. 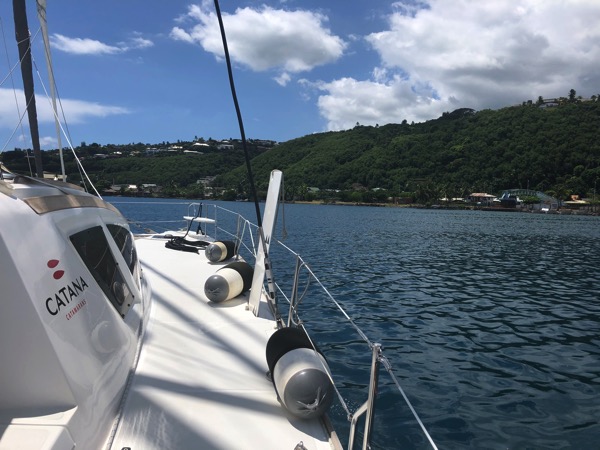 Domini’s THIRD Top Tip for crossing the Pacific is Don’t Run Out of Tea. Just as we were preparing to leave The Galapagos, we realised that our supply of PG Tips was running low. It was looking like we would have to ration our cups of tea on the way across!  Andrew & SWade from Rally Control to the rescue. They were heading back to the UK, and said we could have the last of their teabags.

Now THAT is life saving stuff.

So here we are, on lockdown in Papeete. There’s definitely worse places to be locked down – Brentford for example. And relatively speaking we are pretty safe from Corona Virus. So far there have only been 40 confirmed cases on the island – let’s hope it stays that way. The problem is that if you do actually get it, there’s not much in the way of medical facilities. The ventilator is a bicycle pump and a large balloon, so the key thing is taking note of all the quarantine measures, which the people here are taking pretty seriously. Let me explain just how seriously.

They have banned the sale of alcohol. 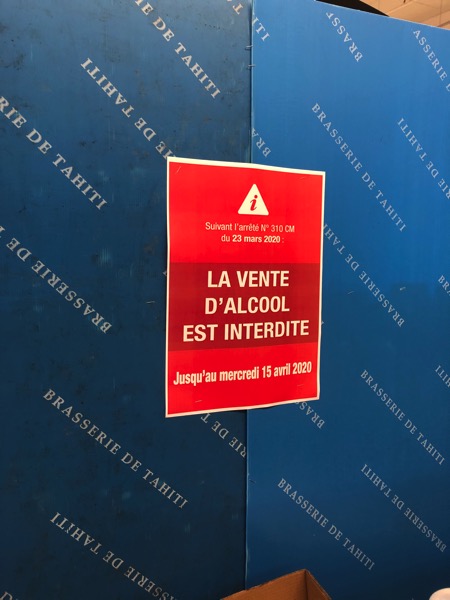 For a French country, it doesn’t get much more serious than that.

Unfortunately we are not allowed off the boat apart from to go to the supermarche. It’s quite frustrating to able to see paradise but not to be able to visit it.

But still, it’s a nice view as the sun goes down.

PS This Post is dedicated to Danny, our little cat.

We had the sad news from Dave and Ali during the crossing that Danny had died.

8 thoughts on “Domini’s Top Tips for Crossing the Pacific”