And lost one iPhone.

Yes – sad but true. As Lyn was climbing out of the dinghy onto the pontoon, Ju’s iPhone slipped out of her handbag and into the murky depths. She muttered something about how she expected the water to have had more specific gravity so it should have floated, but no one really knew what she meant. Ju wouldn’t have minded, but he was on level 60 of Word Warp.

But what this does mean is that this instalment is a little short on photographs. But we shall do our best with what material we have got.

We left our berth on Liberty Landing and sailed up New York’s East River, which was very exciting going past all the famous landmarks.

And under the bridges.

Even though we know the height of the mast, and we know that the bridge is at least 40 feet higher, it still looks like it’s going to hit.

The East River is very busy with all things New York, from taxis, 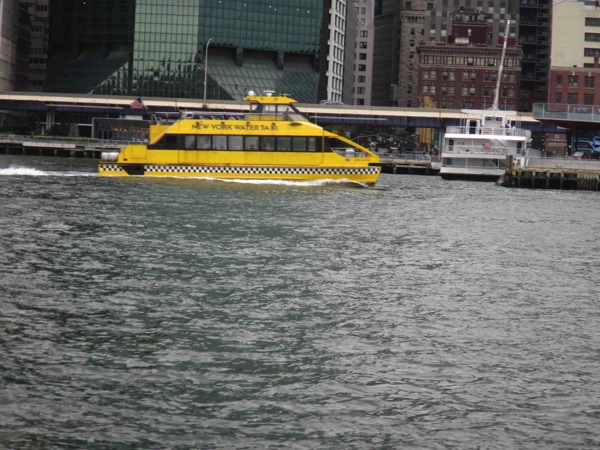 …and can be quite treacherous. The current runs through here at 6 knots or more. One of the bends is called Hell Gate and with good reason.

We went passed The Bronx, and into Long Island Sound where we stopped at a place called Port Washington, and met up again with our friends Stuart & Anne on Time Bandit. And it’s about here that we run out of photos, so you’ll just have to believe us for the next stage of our adventure.

Then it was on to Norwalk, where double circumnavigators (as in they’ve sailed round the world twice) Scott & Kitty of Tamure found us all moorings and invited us round to their home for dinner.

They also took us to a night of singing sea shanties with a local music group. Ju took his piano, but unfortunately apart from What Shall We Do With The Drunken Sailor, he didn’t actually know any sea shanties. So they played some blues instead.

Next it was onto Shelter Island to begin the New England Cruise with the Ocean Cruising Club, of which we are now members. (You have to have crossed an Ocean to join, so its a pretty exclusive club).

And by happy coincidence, just opposite the anchorage on Shelter Island is where Rory’s girlfriend’s family keep their boat. So we all met up and went for dinner. Here we all are on Tom and Inbal’s new boat.

And the next day, again another coincidence, Richard – Ju’s friend (and agent) happened to be in New York on his way to LA for business meetings, (see how high powered his agent is?!) so he popped out to Greenport to see us.

And then it was time to start the Ocean Cruising Club cruise. And like all good cruises it started with a party. Jim & Bentley (who we had met in Norfolk, Virginia) provided the entertainment. And Ju did a bit too.

First stop after Shelter Island was  Duck Island on the way to Menemsha on Martha’s Vineyard. Then on to Edgartown, via Oaks Bluff. Stuart was able to take some photos of the good ship Domini on the way there.

Though this is my favourite photo. 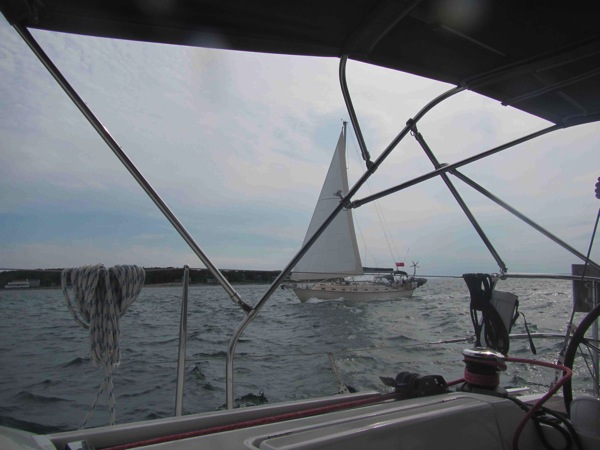 It is us overtaking Time Bandit. Treasure this photo, as it is unlikely to happen again, as Stuart is a champion racing skipper. (Indeed it was he that led us to victory in the Heineken Regatta).

As we were crossing, a submarine surfaced right next to us.

We anchored overnight, and had the most incredible lightning storm, which we sat and watched in our rubber wellies, and with the phones (well…phone) and computer things in the microwave. 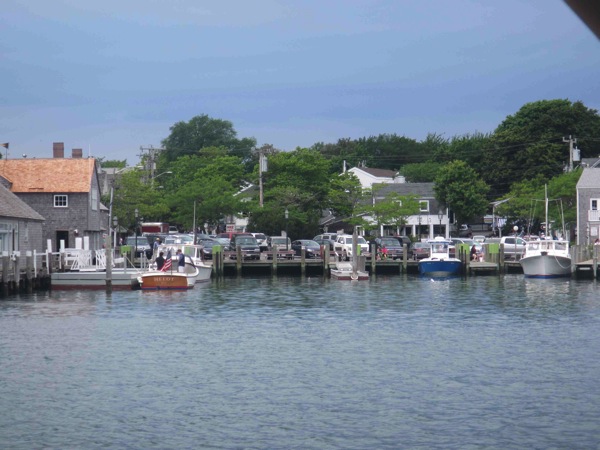 Correct. Edgartown (der dum) is where they filmed a lot of the film  (der dum) “Jaws.” (Dum, dum, dum, dum). We we went to see a fortieth  anniversary screening of it in the local cinema, and it still made us jump. (Can you believe it’s that old?)

We’re having a lovely time here. They’ve even opened a restaurant in our honour.

And here we are having lunch with friends. That’s Chappaquiddick in the background. 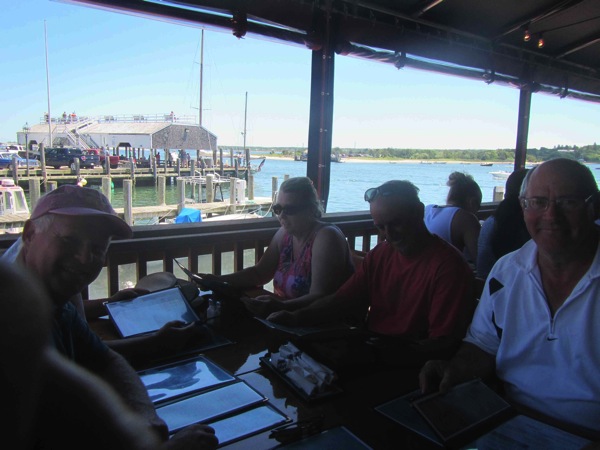 So – what have we learnt one year on?

Well…I guess we are much better sailors now than when we left. Reefing and trimming sails is no longer the palaver it once was, and we manage to moor the boat without crashing most of the time.

One thing is that the life of a cruising sailor has surprisingly little to do with sailing. Of course sailing comes into it, but just as important and rather more time consuming is simply keeping the boat in one piece. There is a never ending list of jobs to do that only ever seems to get longer. At this very moment we are trying to figure out how to give the engine a service, then the generator needs an oil change, and we’ve just noticed a small tear in the genoa luff tape which will need to be stitched before it becomes a major rip. And the sheave on the davits has bent. And…and… Just another day in the life of full time cruisers.

Fortunately, given that Ju is not a natural DIY man, other sailors have been incredibly generous in their willingness to help with repairs, or simply to pass on their wisdom garnered from many years at sea. Stuart, & Ann on Time Bandit have been more than helpful, but so too John & Janine on Orca Joss, Tim & Gayle on Wild Bird, Bruce & Susan on Libby Lou, Scott & Kitty onTamure, John & Alison on Aislig Bheag, Charlie, Ross and of course Chris Warwick and Paul Reed at Universal Yachting. Aaaah – we’re bound to have left someone out. Apologies if it’s you!

And the welcome we have had from the local people that we have met on our travels has been fantastic.  Strangers have invited us into their homes, taken us out for meals, to the theatre, given us lifts, allowed us to use their moorings – the list is endless. It makes us feel a little embarrassed about how in Britain we sometimes treat our foreign visitors, and we have vowed to show more kindness next time we see a tourist lost on the streets of London.

That’s all for now.

Looking forward to our second year at sea.

One thought on “One Year On”