Bora Bora – incredible!  One of those names like Timbuktu that is known to the soul but really only as a by-word for things mysterious, far away and possibly never to be known except for the brave few far-adventurers…

So wrote our friend Steve when we told him we were here. And we couldn’t put it better ourselves. After an overnight sail, we finally saw the famous outline on the horizon. 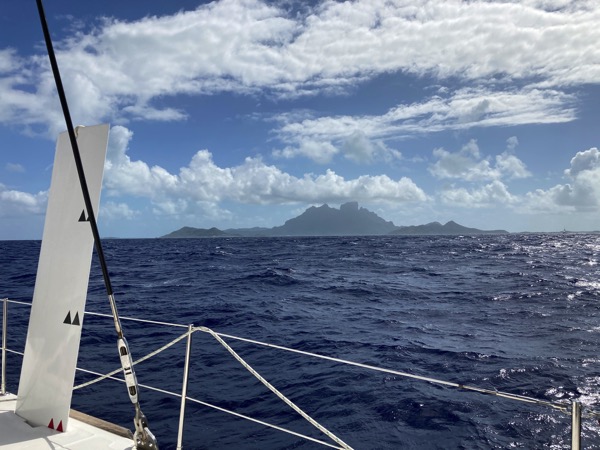 The crossing from Moorea was pretty uneventful, apart from being dive bombed in the night by what must have been a giant albatross with the trots. 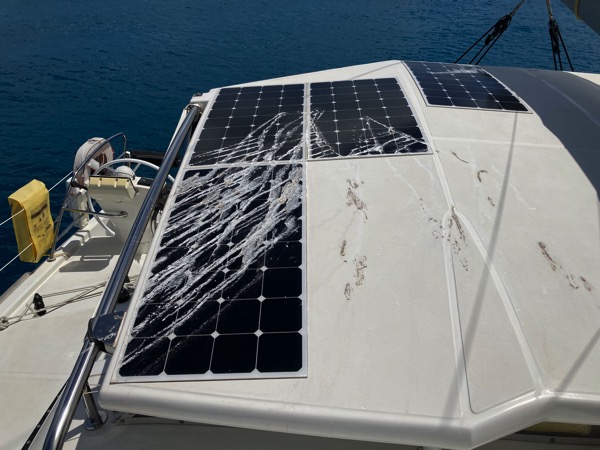 Bora Bora only got prettier the closer we got. 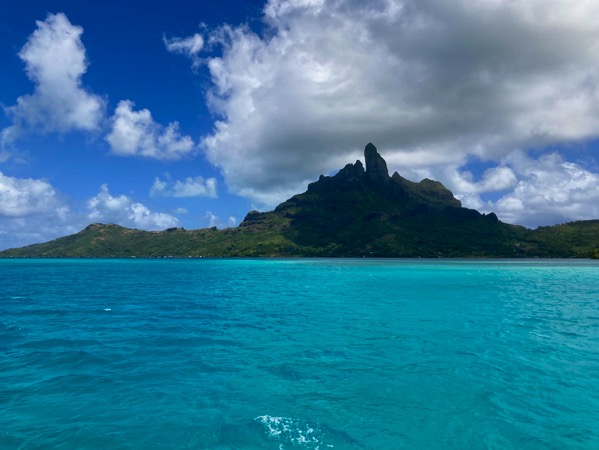 They have these lovely little huts, where the rich and famous come to relax. 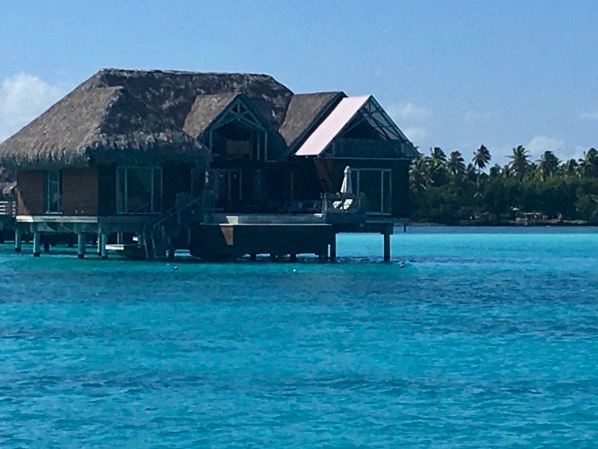 We thought we might treat ourselves to a couple of nights on land. They are very nice inside and we felt that we deserved a little break. 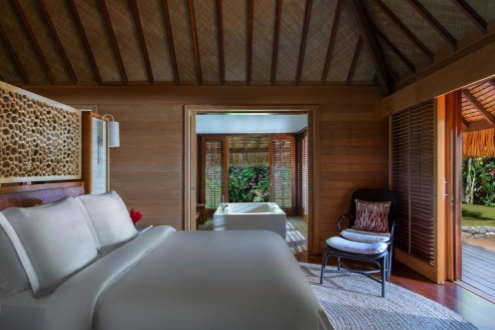 We asked how much they were.

“We’re not buying it, we just want to stay for a couple of nights.”

And that doesn’t include breakfast.

We decided to stay on a mooring ball. Which is $30. Much nicer.

The good news was that Andy and Caroline on Kari of Lymington were here, so we met up for dinner at the very exclusive Bora Bora Yacht Club. 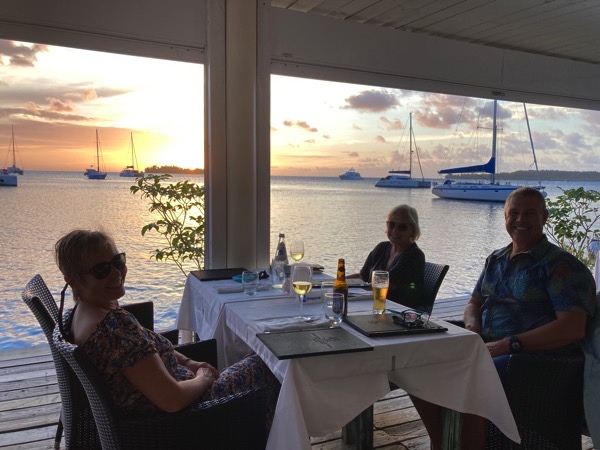 Where the sunsets are particularly lovely. 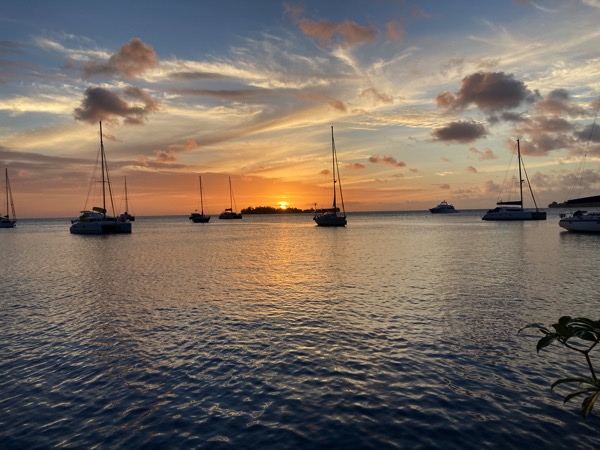 It came as a bit of a surprise to discover that this side of the island, the west, is not generally considered to be that nice! Apparently it’s all a bit commercial. There’s no pleasing some people – it seemed pretty good to us. But the nicest part is supposedly on the east. So the next morning, we let slip of the mooring ball and took the treacherous path round the island. 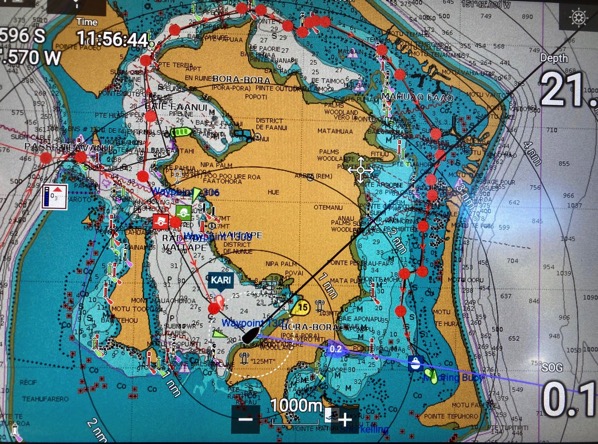 Ok, so it’s not treacherous like Cape Horn is treacherous, but when the depth starts reading 1.0m and going down, it does cause your heart to beat a little faster.

But it was definitely worth the effort. 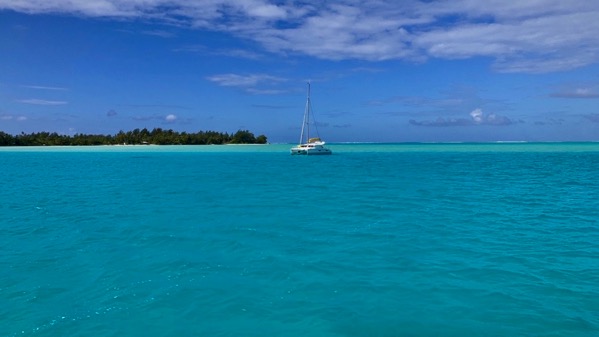 It’s all very romantic. As they say over here, Boa Bora is ideal for the Newly Weds… 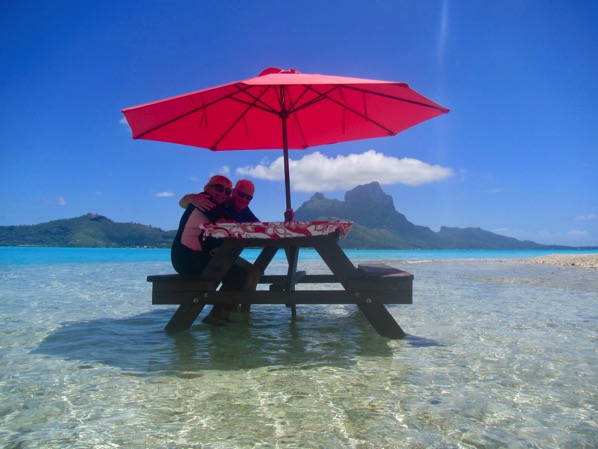 ..and Nearly Deads. (No clever comments about which category we fit into thank you very much.)

All in all, the perfect place for a couple of old swingers. 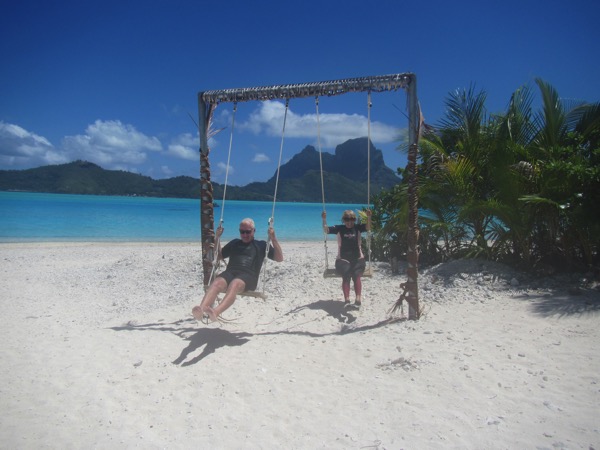 The snorkelling is spectacular. 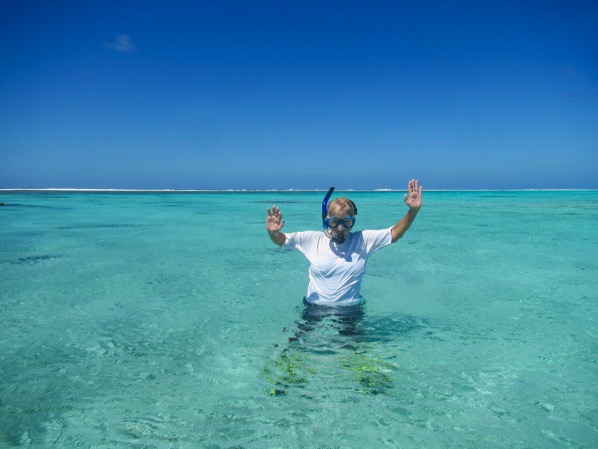 It’s fair to say that we have done a lot of snorkelling over the last few years, and so consider ourselves to be something of experts. In our considered opinion, we have to say that this is some of the best. 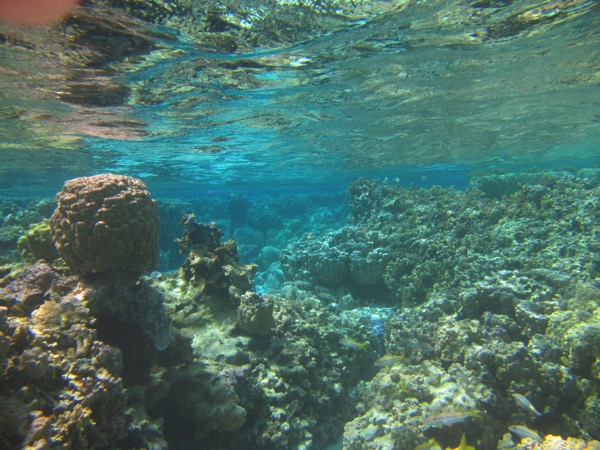 They call it The Coral Garden. 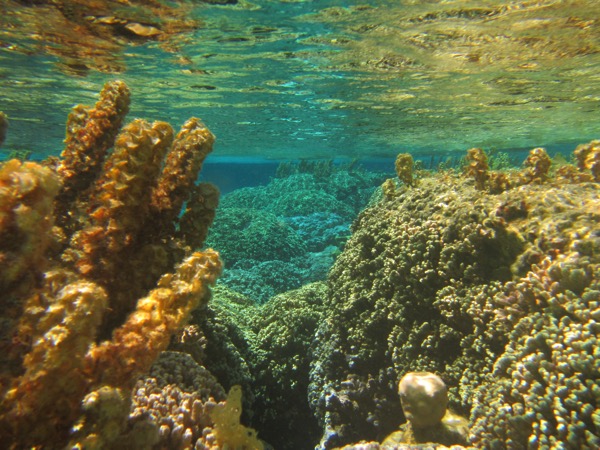 The water is so clear it’s like swimming in gin. And Ju should know.

There’s lots of fish. Little ones… 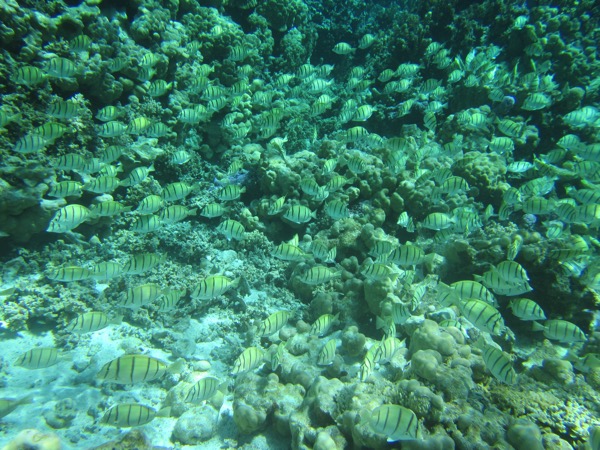 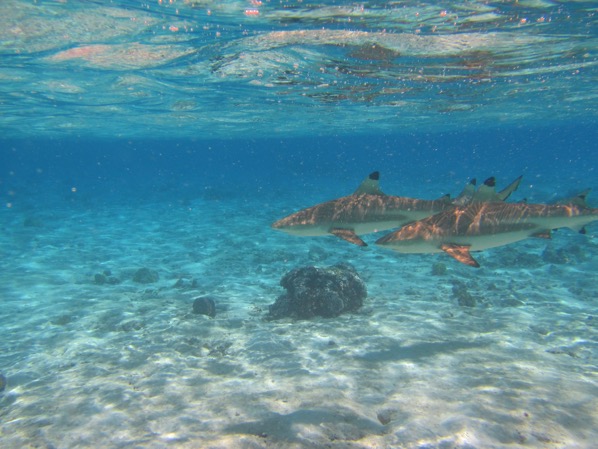 But the one thing you miss out here in paradise, is a decent curry. So we decided to turn Domini into the Bora Bora Balti House for a night. 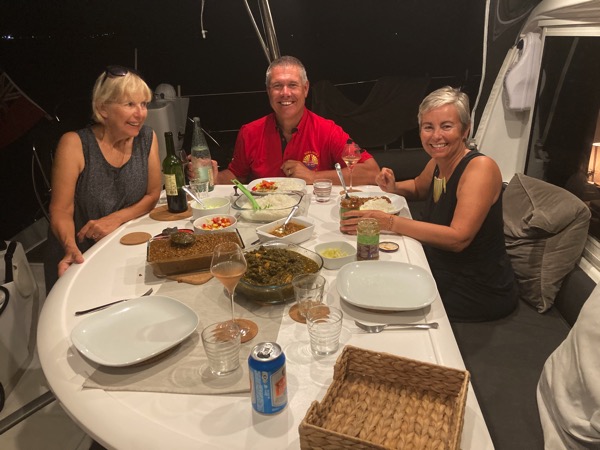 With chicken saag, daal, rice and all the trimmings. Including Patak’s lime pickle. Woooo woo! Couldn’t get any popadoms though. But we did have the perfect guests.

And a trip to Bora Bora wouldn’t be complete without a trip to Bloody Marys. Restaurant to the stars. Anyone who is anyone has eaten here, from Marlon Brando to Barry Gibb. 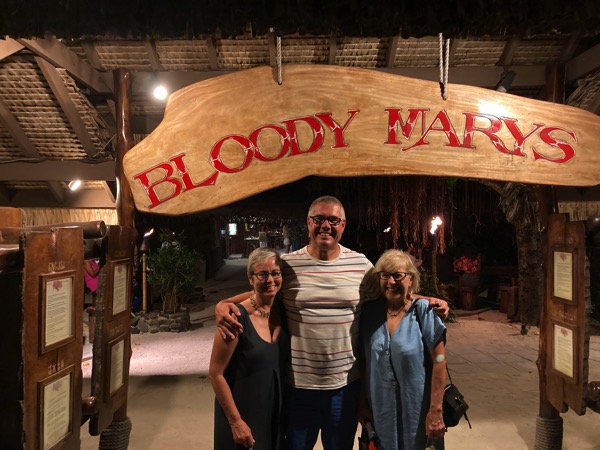 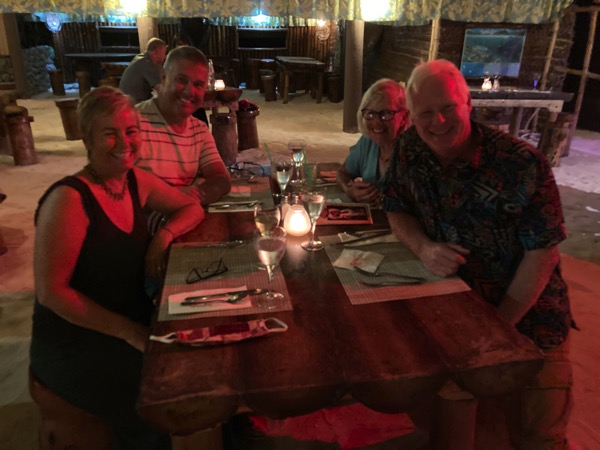 Eat Out To Help Out. We’re a long way from home, but I think we can all agree that we’re doing our bit.

Before we go there is just time for this edition’s Boatblog ® Caption Competition. 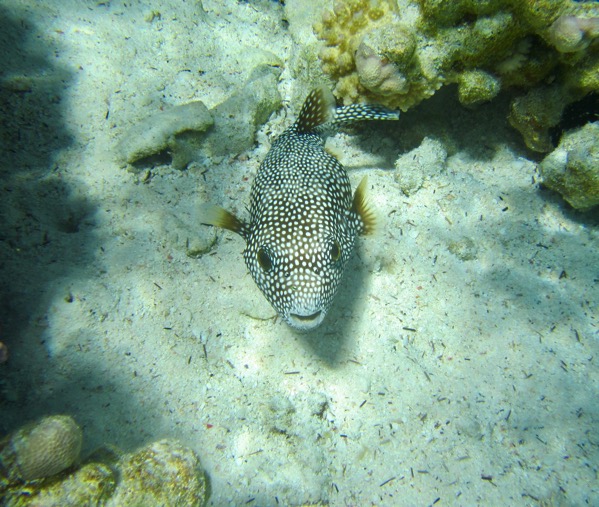 “Just ‘cos you’re wearing a mask, doesn’t mean I have to.”

Better ones than that to the usual address on a ten pound note. And we have a last minute entry for the Arty Farty prize.

“The Clams,” by Ju – featuring the newly discovered underwater setting on the camera. It took five years, but now he’s found it. 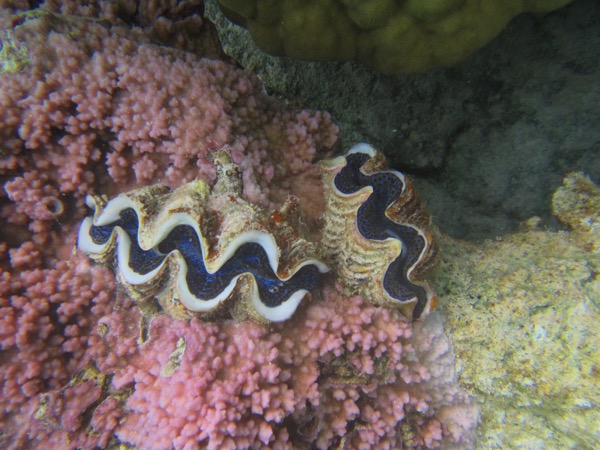 And a special tribute to Andy, for his dramatic attempt to win A Darwin Award*, with a giant moray eel.

* The Darwin Awards salute the improvement of the human genome by honouring those who accidentally remove themselves from it in a spectacular manner.

7 thoughts on “Bora Bora – so good they named it twice”